The High Court in Admiralty. The 39-year-old defendant will be sentenced on July 30.

A Hong Kong man has confessed to stabbing his ex-wife outside Family Court because he had not been allowed to see his daughter for more than two years.

The High Court heard on Thursday that Chong Hay-chik, 39, used a 23-cm (9-inch) knife to stab Pang Lin five times in her abdomen before he was subdued by security guards outside a courtroom in Wanchai Tower on May 8, 2017.

The case prompted the Family Court to enhance its security later that year, introducing mandatory screenings by handheld metal detectors.

For two years after the attack, Chong denied that he had tried to murder his ex-wife, pleading guilty instead to an alternative charge of wounding with intent. Both crimes are punishable by life imprisonment.

Prosecutor Juliana Chow Hoi-ling said Chong and Pang were scheduled to attend court on the afternoon of the attack to review Chong's application to reduce child support.

When he saw Pang arriving about 12 minutes before the hearing, Chong pulled the knife from his pocket and attacked her.

Four guards rushed to capture Chong and he dropped the knife.

Under caution, Chong admitted to police that he had assaulted Pang because she did not allow him to see their daughter. He also confessed to preparing the knife by wrapping it with wire and bandages to improve his grip of the weapon. 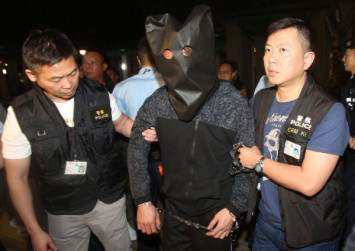 Pang was sent to Queen Mary Hospital, where doctors found bleeding from her arm and lower back, and internal bleeding in her thorax, abdomen and pelvis. She also had lacerations to her right kidney and liver.

According to the court, she suffered a collapsed lung and intramuscular hematomas as well as a bone fracture and displacement. Emergency surgery was performed, during which her kidney was removed.

Pang was in intensive care for four days before she was discharged from hospital on May 20.

In mitigation, Chong's defence counsel Memi Ng revealed that the pair met in Shenzhen in 2011. They were married in Hong Kong in 2012, and gave birth to a daughter in August 2013.

The relationship turned sour the next year, prompting Chong to move back with his parents while their daughter lived with Pang. The pair was legally separated in June 2015.

Ng said Chong felt his ex-wife had stolen his daughter because he had not seen her since December 2014.

"I haven't seen my daughter for a long time," Chong said, when asked to explain his attack. "Perhaps I was too tensed up, too tense."

The defence appealed for a lenient sentence, arguing that Chong had committed the offence in a moment of impulse and that he genuinely regretted his actions.

Madam Justice Anthea Pang Po-kam will sentence Chong on July 30, pending reports on his psychological and psychiatric condition as well as the victim's latest medical report and impact assessment.