AsiaOne and The Star/Asia News Network

A man with a taste for raw fish in Fujian province, China, ended up with a liver filled with parasites, Kwong Wah Yit Poh reported.

The man, whose surname is Lin, was sent to hospital after suffering from high fever, vomiting and a persistent bad cough. According to ET Today, he had a 39-degree fever for nearly 10 days which did not respond to his efforts to self-medicate.

At the hospital, an X-ray later revealed that Lin's liver was crawling with parasites and he was diagnosed with Clonorchiasis.

According to Lin's doctor, the disease is caused by parasites such as the Chinese liver fluke, which is commonly found in undercooked freshwater fish.

The larvae of the parasites hatch in the human intestine after being eaten, after which they settle in the bile duct. The Centres for Disease Control and Prevention's website states that these parasites feed on bile and can live for up to 20 to 30 years in a human body. 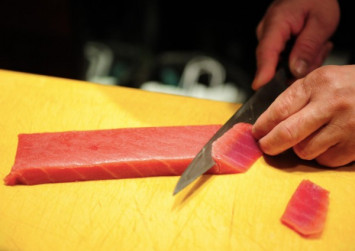 Lin admitted that he has been enjoying raw fish regularly for the past three years and believed that "as long as you slather enough mustard on it, the parasites will die."

Lin's doctor shared that the only way to avoid such infections is to avoid eating raw food altogether.

Otherwise, it is crucial to pay strict attention to the food's origins. As Clonorchiasis has no obvious symptoms in the early stages, by the time one detects symptoms like high fever, fatigue and upper abdominal discomfort, it is usually at a later stage of infection.