Zhang Yuhuan, a man from Jiangxi province who had his name cleared after being wrongfully detained for about 27 years, received state compensation of more than 4.96 million yuan (S$1,012,651) on Friday from a local court.

"We accept the result, even if we feel a little disappointed about the amount," said Zhang's elder brother, who received the compensation on Zhang's behalf on Friday.

"Zhang Yuhuan plans to use the money to buy apartments for his two sons first to make up for the time he couldn't look after them, and use the rest for a pension."

On Aug 4, the high court overturned the original ruling in which Zhang was given a suspended death sentence for intentional homicide, and found the 52-yearold not guilty because the evidence in his case was not strong enough to prove his conviction.

Zhang was freed that day and returned home. He had reportedly been the longest-serving wrongfully convicted inmate in the country at the time of his release.

On Sept 2, he applied for state compensation of 22.3 million yuan.

Although what Zhang finally received was lower than what he had applied for, it could be the highest compensation on record for an acquitted person in the nation, according to ThePaper.cn, a Shanghai-based online news portal.

Zhang's lawyers tried to help him get more compensation for mental anguish, "but this part depends more on a court," said Luo Jinshou, one of Zhang's lawyers.

A judicial interpretation issued by the Supreme People's Court, China's top court, stipulates mental anguish should not exceed 35 per cent of state compensation that a person receives for damages to property or loss of personal liberty. But for some acquitted people wrongfully sentenced to death or other extreme penalties, this part could be and has been increased. 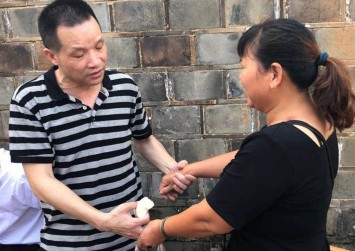 Although Zhang finally got about 45 per cent for mental anguish, it is still lower than a few cases in Jilin province, according to Luo.

Zhang also applied to the provincial procuratorate for an investigation into the judicial officials whose miscarriages of justice caused his wrongful detention, but has not received any response so far.

Zhang, a villager from Jinxian county in Nanchang, Jiangxi, was named as a suspect when the bodies of two boys were discovered in a reservoir in the village in 1993.

In January 1995, he was sentenced to death with a two-year reprieve for the crime of intentional homicide by the Nanchang Intermediate People's Court, meaning his sentence would be reduced to life imprisonment if he did not commit new offences during the two-year period.

Zhang was unhappy with the ruling and appealed to a high court.

Two months later, the high court demanded the lower court retry the case for insufficient evidence, but the retrial was not started until November 2001, and the intermediate court upheld the original ruling.

Zhang appealed again, but this time his appeal was rejected by the high court.

After frequent appeals from Zhang and his family members, the high court reheard the case on July 9 this year.