Hongkongers of every age, profession and background, from every corner of the city, march in a massive show of solidarity and defiance.

Nearly 2 million protesters flooded the streets of Hong Kong on Sunday, organisers claimed, delivering a stunning repudiation of Chief Executive Carrie Lam Cheng Yuet-ngor's governance and forcing a public apology out of the city's leader over her campaign to bulldoze a controversial extradition bill through the legislature.

A day after Lam suspended her push for the bill, expecting it to defuse a crisis that has seen violent clashes between mostly young protesters and police, the centre of Hong Kong was brought to a complete standstill as the masses marched to chastise her for refusing to withdraw the bill or apologise when first asked to, and declaring that nothing short of her resignation would satisfy them now.

Just the day before, Lam had said she would hit the pause button on the bill but take another shot at it to build a bigger consensus, as there was still a need to allow the transfer of fugitives to mainland China and other jurisdictions with which Hong Kong has no extradition deal.

A day later, six hours after protesters had transformed Central, Wan Chai and Admiralty into a sea of black, the public apology they were demanding came in the form of a government statement at night.

"The chief executive admitted that the deficiencies in the government's work had led to substantial controversies and disputes in society, causing disappointment and grief among the people," it read.

"[She] apologised to the people of Hong Kong for this and pledged to adopt a most sincere and humble attitude to accept criticisms and make improvements in serving the public."

A government source said the bill would die a "natural death" without a timetable to relaunch it. 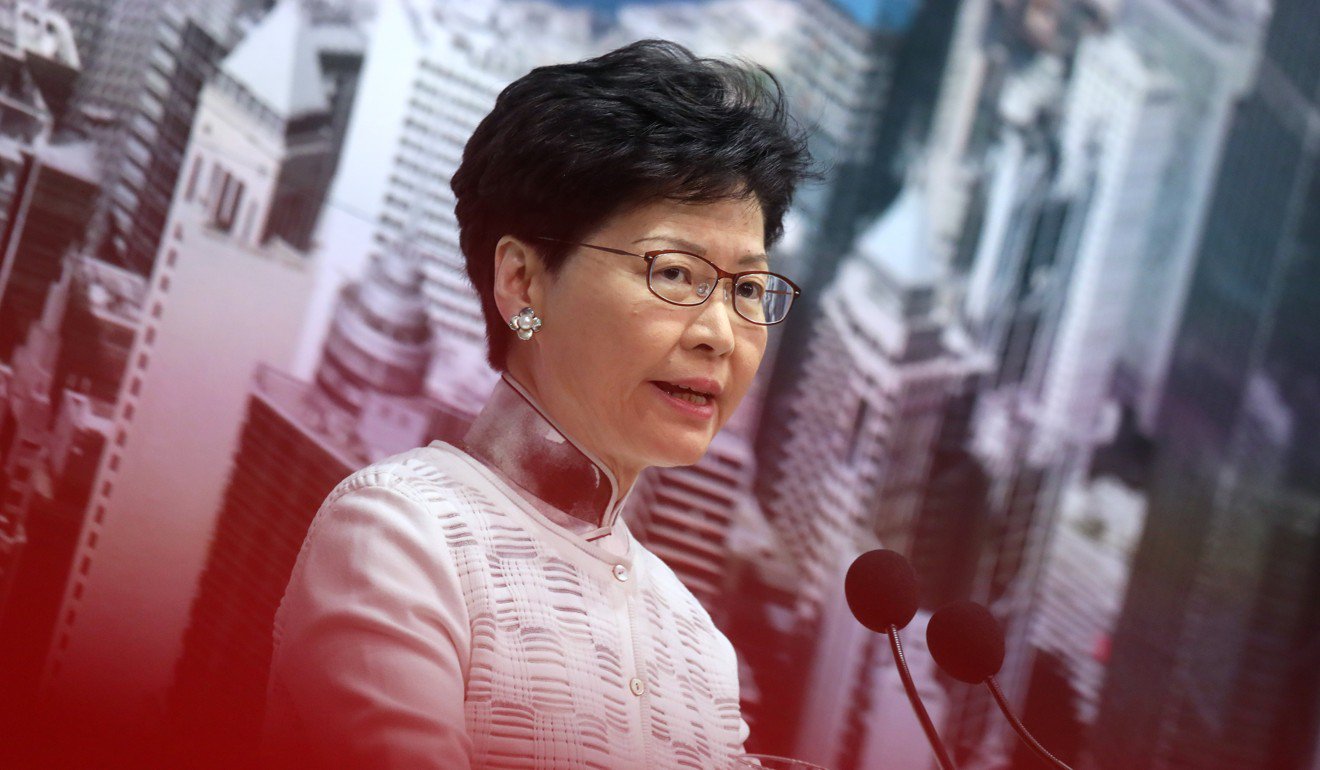 In a city polarised by politics for months over the extradition bill, this was the second Sunday in a row that historic numbers took to the streets to protest, but this time it was bigger and covered wider swathes of the city.

Braving the sweltering summer heat, wearing black to reflect their mood, Hongkongers of every age, profession and background, from every corner of the city, marched in a massive show of solidarity and defiance. "Don't shoot our kids!" the crowd chanted. "Students are not rioters!"

They were out to condemn police for firing tear gas, rubber bullets and beanbag rounds at protesters last Wednesday, and to demand the government retract its categorisation of the violence as a riot.

Sammi Lee, 35, said she was touched by the commitment of young people on the streets to their cause against the bill. 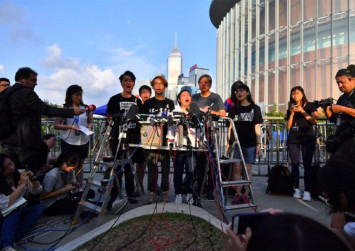 "The police should be professional. Why did they treat young people and media workers with such violence and rudeness?" she said. "Young people have already came out on the streets. As an adult, I have no excuse not to join."

Christian groups were also out in force. Auxiliary bishop of Hong Kong Joseph Ha Chi-shing called on followers to take to the streets to wake up people in authority and ask police to show restraint.

"We need to be the light in the world amid the darkness," he said. "Victory is conscience and peace."

Former No 2 official Anson Chan Fang On-sang, now a vocal critic of the government, said it was a clear message to the chief executive to withdraw the bill altogether.

Chen said she was personally willing to give Lam a second chance if she could restore the credibility of her government.

Some needed medical attention as they succumbed to the heat and humidity. In one extraordinary scene, the crowds occupying Lung Wo Road parted to let a solitary ambulance through, then swept back in as it went past.

After last week's clashes, police mostly stood back and let the crowds to take over, even allowing them to swarm over the roads right outside their headquarters.

A police source said the force had only maintained a minimal presence at the protest to allow some room between those who were marching and frontline officers in the wake of Wednesday's violence.

"We want to express our goodwill and give room to both sides. We don't want to see more conflict," the source said. But he added the force had the capability to handle any emergency.

As seemingly endless waves of black moved from Victoria Park in Causeway Bay to government headquarters in Admiralty, train stations were swamped with hundreds of thousands pouring into the protest zone. 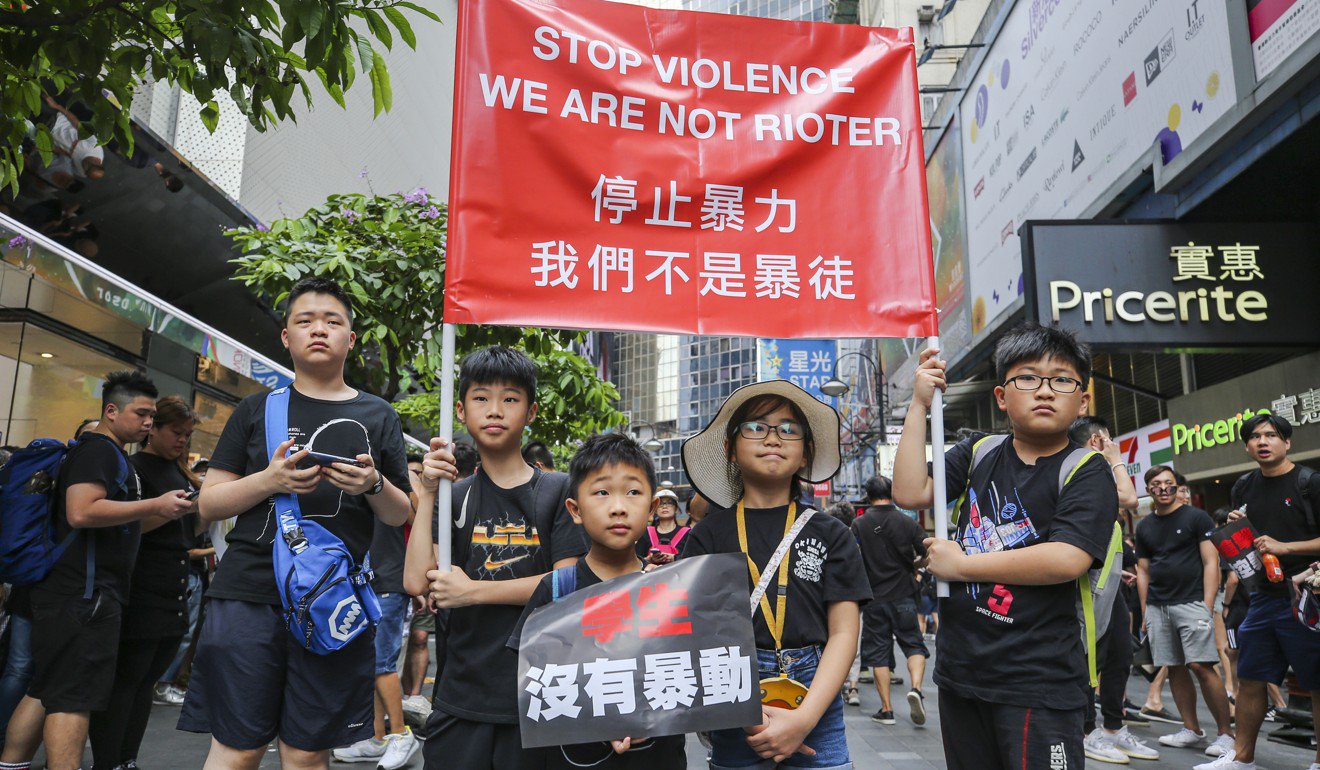 Bus services were in disarray because of road blockades, and those from the Kowloon side trying to join the rally found themselves waiting up to an hour at a time to board cross-harbour ferries from Tsim Sha Tsui.

At the official start of the march, at around 3pm, the size of the crowd forced police to open all the six lanes of Hennessy Road. The masses then spilled over onto three parallel streets in Wan Chai, major thoroughfares Lockhart Road and Hennessy Road, and Jaffe Road.

By evening, they had taken over Harcourt Road, the thoroughfare that became the iconic base of the 2014 Occupy movement when they blocked major transport arteries for 79 straight days in the name of fighting for greater democracy.

They had vowed to be back, and they returned with a vengeance this time. 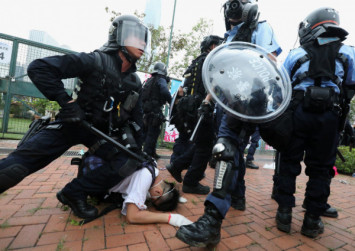 The mass rally was peaceful, but there was some anxiety as night fell and protesters started descending on Harcourt Road and outside the government headquarters, seemingly digging in for a longer haul.

Masked protesters had also started building barricades on Lung Wo Road, this time amid a conspicuously thinner police presence than last week.

It was 11pm when the Civil Human Rights Front, the organiser, declared an official end to the march.

The front put the final turnout at close to 2 million. The police estimate was far lower at 338,000, but they were only counting those who marched along the initially agreed route.

"No one in Hong Kong will accept it because she has only softened the tone in the statement," he said. "But she didn't answer to Hongkongers' demands."

Sham called for the bill to be scrapped altogether, saying the front would wait for the government's response before deciding whether to escalate its action.

He also urged more people to join in various strikes and boycotts planned for Monday.

In the early hours of Monday, several thousand, mostly young, protesters were still occupying sections of roads in Admiralty, stretching from outside Pacific Place shopping centre to streets around the government headquarters and Legislative Council Complex. The protesters were bedding in for the night. 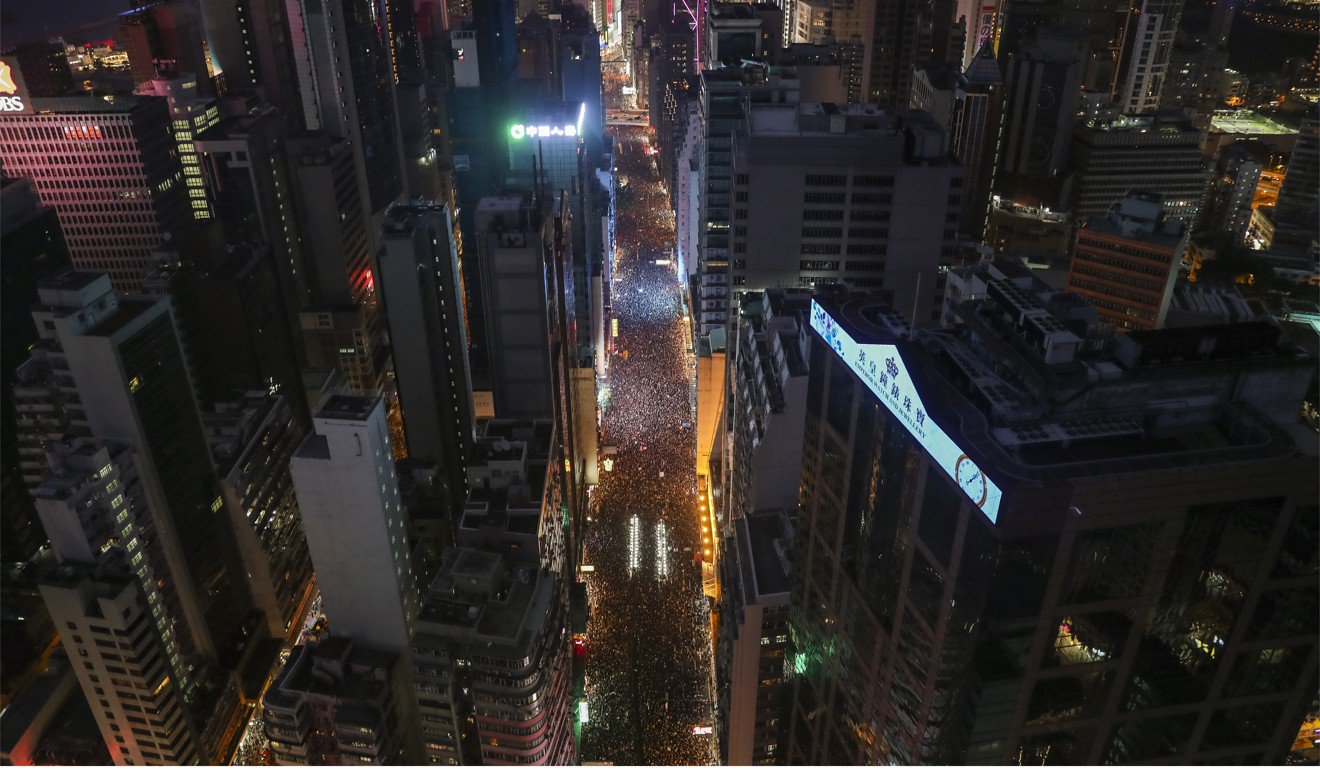 Protesters were still on the march well into the evening. Photo: South China Morning Post

Earlier on Sunday, Financial Secretary Paul Chan Mo-po warned that the ongoing social unrest over the extradition bill was hurting Hong Kong in some aspects of the economy and livelihood, but gave a public assurance that the city's financial markets were still operating in a "stable and orderly" manner.

In a closed-door meeting in the morning, Beijing's liaison office asked more than 200 local delegates to the National People's Congress and the Chinese People's Political Consultative Conference to support the Hong Kong government in riding out the storm.

Separately, the Commissioner of the Foreign Affairs Ministry in Hong Kong also raised a solemn representation to overseas media outlets for reporting that Beijing was dismayed by Lam's handling of the extradition bill row.

The commissioner reiterated the central government's support and respect for Lam's move to suspend the bill.