US fast-food company McDonald's has apologised for its latest advertisement after some internet users accused it of advocating independence for Taiwan.

The television commercial, which first aired in the self-ruled island on January 6, included a two-second clip of a student ID card that showed Taiwan as a country.

Social media users picked up on it and voiced their complaints.

"The nationality should be China! What is Taiwan? A province. Please know your place," one person said on WeChat.

"McDonald's has put this out clearly for 1.3 billion Chinese people to see, what is the meaning of this? Are they supporting Taiwan independence?" wrote another.

Other comments were more supportive of Taiwan.

"The mainland really is sick, using patriotism to stir things up all day and making life impossible for people," read a comment on Weibo, China's Twitter-like platform.

"This is over the top, they even want to go abroad to boycott McDonald's. I'm tired," read another.

McDonald's China released an apology on Weibo on Saturday, saying the advert was directed by an unnamed Taiwanese agency and had since been pulled.

"The ad company did not carry out strict background checks on the film and this caused a misunderstanding that we deeply regret," it said.

"We have always supported the one-China policy and continue to uphold Chinese territorial sovereignty."

The "one China" policy, first articulated in 1972 at the end of US President Richard Nixon's trip to China, states that "there is but one China and that Taiwan is a part of China", but leaves room for interpretation as to whether Beijing or Taipei should be the legitimate government.

Read Also
Xi Jinping says China 'must be, will be' reunified with Taiwan 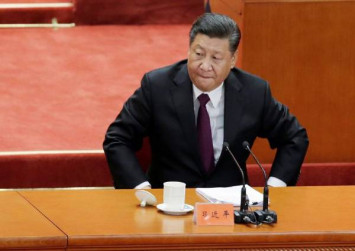 As a result, foreign nations are only able to establish official diplomatic ties with one or the other.

Taiwan is a self-governing democratic island that Beijing considers to be a breakaway province to be reunited with the mainland, by force if necessary.

In recent years, it has put intense diplomatic pressure on the international community to sever official diplomatic relations with Taiwan as cross-strait tensions have increased under Taiwanese President Tsai Ing-wen, who supports independence.

Its calls for Taiwan to reunify with the mainland have also intensified, as Chinese President Xi Jinping recently proposed that Taiwan could be governed under the "one country, two systems" model used in Hong Kong and Macau.

Beijing has also pressured international corporations such as American Airlines, Delta Air Lines and the Marriott hotel chain to remove all references to Taiwan as a non-Chinese territory on their websites.

Zhi Zhenfeng, a researcher at the Chinese Academy of Social Sciences, told the news outlet Haiwainet.cn that the one-China policy had sufficient basis in Chinese and international law, and that China's complete territorial sovereignty was a core national interest.