A woman whose ashes were stolen for a dead wedding ritual called a ghost marriage.

Three funeral home workers in northern China have been detained for stealing the ashes of a dead woman to sell to a local family for an illegal ghost marriage business.

Ghost marriage, banned in China today, is a superstitious activity originating from ancient China with one or both parties of the marriage being deceased.

In this practice, the family of a dead man usually finds a spouse - a dead woman - for him and bury the ashes or body of the woman with him as it is believed that a lonely grave would hurt the prosperity of the family's offspring.

Police in Wenshang county, Shandong, eastern China, put the three workers of the local funeral parlour under criminal detention on the charge of stealing ashes, after receiving a tip-off from one of their colleagues, The Beijing News reported.

According to the report, a worker surnamed Shao switched the ashes after the woman's body was cremated at the funeral home, while another worker with a surname Lei drove a car to take it out of the funeral facility and a third co-worker surnamed Zhang was responsible for contacting the buyer.

The dead woman was a live-streamer who committed suicide last month by drinking pesticide in front of her audience. Holding a bottle of pesticide, she told her followers the live-streaming show was her last one since she had been suffering from depression for months. 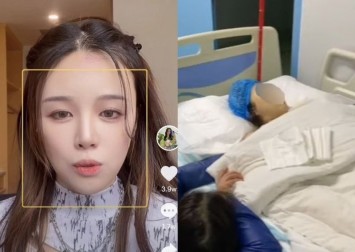 Her relatives later accused several internet users of inciting the woman to drink the pesticide. Organisers of a ghost marriage can reportedly make profits of up to 70,000 yuan (S$15,000) in the province if the buyer is happy with the dead woman's background.

Zhang's wife told the newspaper that the buyer, whose identity was not released, did not agree to "marry" the dead woman's ashes to their deceased son. The livestreamer's ashes have been recovered and returned by her family to her hometown in Hunan province, central China, the report said.

Shandong Provincial Civil Affairs Department has since vowed to crack down on ghost marriages and said it will launch inspections of all funeral facilities, an official from the authority said. It is not the first time the medieval practice has been exposed by mainland media.

Last year, the ashes of a 22-year-old woman were sold by her own family in Dezhou, Shandong, eastern China, for thousands of yuan in a ghost marriage scheme. The woman, named Fang Yangyang, was beaten to death by her mother-in-law because she had not fallen pregnant, the China News Service reported.

A court in Qingyang, Gansu, sentenced a man to death in February for killing two mentally-disabled women before selling their bodies to rural families for ghost marriages, the court said on social media app WeChat. The man earned 35,000 yuan from the first victim and was caught by the police while transferring the body of the second victim.