This carpet was likely used to to decorate the imperial palace during the Ming dynasty.

The carpet features a large dragon in the lower centre of the piece, surrounded by a field of floating clouds. The mythical creature is enveloping a flaming pearl, which symbolises prosperity.

Benjamin Mini, director of rugs and carpets at Skinner, said the fact that the dragon has five claws was an important clue for the experts to indicate that it was woven for the imperial palace because only goods for the emperor could feature five-clawed dragons.

“Within the Daoist framework of belief, dragons on floating clouds can represent the wanderings of the soul or the attainment of dreams within reality. Dragons also often signify auspicious powers, especially control over the weather or the seasons,” he said.

The carpet was made out of wool pile interwoven with a silk base and uses techniques that are commonly attributed to the Ming era.

The carpet is believed to have been crafted during the reign of Emperor Wanli (1563–1620), who ruled for 48 years between 1572 and 1620, making him the longest-ruling leader of the Ming dynasty.

“This makes it one of the oldest known Chinese rugs and part of a very small group of imperial Chinese weavings,” said Mini.

Skinner sold the carpet as part of an auction of the collection of Jim Dixon, a collector of historical antiques with a particular interest in rugs, carpets and other textiles. He died in 2020 at 77 years old.

Dixon was famous for collecting items from before 1860, and he was not too concerned with their quality, preferring instead to focus on their design and techniques. He opened a viewing house in Occidental, California, on the west coast of the US, where he showcased his collection to the public.

“He had at least two other Ming-era carpet fragments in his collection, as well as several other pieces which could date as far back to the earliest days of the Qing dynasty (1636–1912),” said Mini.

In November 2021, an exquisitely well-preserved Ming dynasty carpet that likely sat under the throne of the emperor sold for US$7.16 million and was “returned to Asia”. 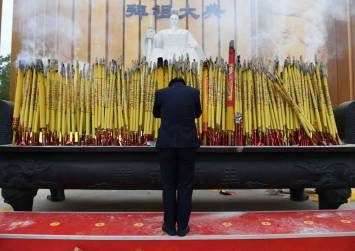 The price difference between that carpet and the Dixon piece is due to a few factors.

Notably, the carpet sold by Skinner does not have a border, so it is technically a fragment. It was also clearly restored, but Mini said it was probably repaired a long time ago, during the late Ming or early Qing dynasties.

Mini said that another expert, Murray Eiland, hypothesised that the carpet may have been restored at the same, or similar, place to where it was originally made.

“As a specialist and collector myself, these qualities allow us deeper insight into the centuries-long story and lifespan of the textile,” Mini said.

Skinner also sold two fragments of Chinese rugs from the reign of Emperor Kangxi (1654–1722) during the Qing dynasty, which sold as a pair for US$5,625.

Other rugs that fetched large sums were a Persian carpet that went for US$40,625 and a carpet from the Konya region in Turkey that fetched US$35,000.

The recent Skinner auction was the first of five sales of the Dixon collection, and it made a total of US$1,375,805. The Ming dynasty carpet fetched the largest sum for one lot.