'Money from sky' cryptocurrency promoter and partner held for fraud

A flamboyant Hong Kong cryptocurrency businessman thought to be behind a recent "money from the sky" stunt was arrested on Thursday with a core member of the company for conspiracy to defraud after allegedly selling "mining machines" to investors.

Officers from the police's Commercial Crime Bureau arrested Wong Ching-kit, 25, better known as "Coin Young Master", and a 20-year-old man at their office in TML Tower in Tsuen Wan.

In January, a number of Hongkongers claimed they were duped into investing in so-called cryptocurrency mining machines, which are high-powered computers, losing about HK$3 million (S$517,000) in total in a venture linked to Wong.

In February, an investor filed a lawsuit against Wong in the District Court seeking a refund of HK$125,000 for payment for five machines.

Chief Inspector Crystal Ho Yui-kuen from the bureau said late on Thursday that 16 men and two women, aged 24 to 55, had approached police for help since December with complaints against the pair's firm, which opened in 2017. She said their investments amounted to more than HK$2.6 million in total, with one complainant losing over HK$1.1 million.

She said Wong and his associate had made a lot of false claims at promotional seminars and on social media for mining machines from April to August last year, inviting clients to buy them.

But Ho said: "We know the company had been promoting the product in a high profile way [before April last year], so we don't rule out the possibility that there might be more victims, or the offence took place over a longer period."

Read Also
Hong Kong investors claim they lost $520,000 in venture of cryptocurrency promoter thought to be behind 'money falling from sky' stunt 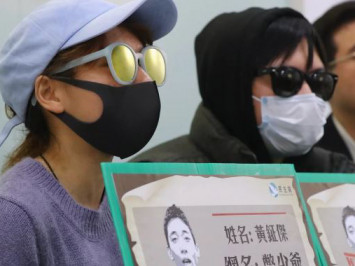 Officers collected a large amount of documents, computers and cash from several locations, including the Tsuen Wan office and Wong's luxury house on Hing Keng Shek Road in Sai Kung.

Ho said the operation would continue and further arrests were possible.

The Democratic Party, which is helping the investors, said in January that it had received more than 20 complaints since October from people claiming to have been cheated after investing in Wong's mining machine. Crypto mining is a process that creates a virtual currency using a computer programme.

The investors claimed Wong had misled them into buying mining equipment for the digital currency "filecoin". They said they were told their investment could turn a profit within three months.

But it turned out the cryptocurrency was not yet tradeable on the market. Promises of refunds were never honoured.

Wong was widely thought to be behind a stunt in December in which HK$100 banknotes were thrown from a high-rise in Hong Kong's poorest district, Sham Shui Po, sending bystanders into a frenzy.

He has denied any involvement but moments before notes fluttered off the building, Wong was seen stepping out his HK$6.2 million Lamborghini and asked onlookers in a video he posted online if they "believe money will fall from the sky".

After the incident, he was arrested on suspicion of disorderly conduct in public but released on bail.

Wong runs a Facebook page and various online groups to promote cryptocurrencies, including "File Cash Coin", which he said he co-founded.

He previously hit back at critics on his Facebook page. He did not comment on the investors' allegations directly but said he had been unfairly targeted.

Wong was born Kwan Tsz-kit and previously worked as a swimming instructor. He was convicted of theft and sentenced to 160 hours of community service in 2012 and changed his name afterwards.