The lander, together with an ascending vehicle, separated from the orbiter early on Monday morning using “precision manoeuvring” by operators on Earth, and will make a soft landing “at an appropriate time”, CCTV said.

“All systems on the Chang’e 5 are working in good condition, and the communication with and control from the ground station are going smoothly,” it said.

The spacecraft decelerated twice on Saturday and Sunday after 112 hours of flight from the Earth, and successfully entered the orbit 200km (124 miles) from the moon before the separation.

The lander will aim for the volcanic Mons Rümker in the northwest area called Oceanus Procellarum, or “Ocean of Storms”, on the near side of the moon.

This area of relatively recent volcanic activities – about 1.2 billion years ago – has a younger rock surface and these samples are expected to contain information about the more recent history of the moon compared with previous lunar samples collected by Americans and Soviets from older regions. 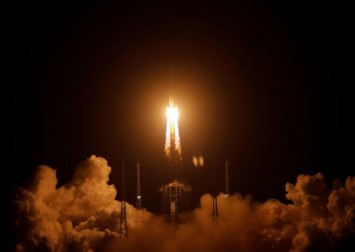 The Chang’e 5 will drill as deep as 2 metres (6.6 feet) for rock cores, and also take samples from the surface using a robotic arm, with the goal of collecting 2kg (4.4-pound) samples in its protective capsules over two weeks.

In the meantime, the orbiter will keep circling the moon, waiting for the lander to finish sampling before ascending to the orbit and redocking. Then the mission will launch from the lunar orbit and return to Earth. It is expected to land in China’s Inner Mongolia region in mid-December.

The Chang‘e 5 was launched on Nov 24 from the Wenchang Spacecraft Launch Site on the southern island of Hainan.

It is the first attempt in more than four decades by any country to retrieve samples from the moon.

If successful, China will become the third nation after the United States and the former Soviet Union to bring back lunar samples. It will set a significant milestone for its moon programme – to land Chinese astronauts on the moon by 2030.

It marks the third phase of the China National Space Administration (CNSA)’s Chang’e missions, named after the Chinese moon goddess, since 2007.

Chang’e 1 and 2 orbited the moon and Chang’e 3 made the first soft landing with a rover, Yutu 1. In 2019, Chang’e 4 became the first probe to land on the far side of the moon and it has since worked intermittently.

Beijing’s space ambition goes beyond the moon, with the plans to establish a permanent space station by 2021 and missions to other planets, such as Mars.