Those travelling via the Hong Kong-Zhuhai-Macau bridge have to undergo an on-site PCR nucleic acid test at the Hong Kong border, in addition to presenting proof of a prior negative PCR test.

More than 130 travellers were stranded at the Hong Kong-Zhuhai-Macau Bridge overnight on Tuesday (June 22) after on-site nucleic acid tests falsely showed them to be Covid positive.

Hong Kong's Centre for Health Protection (CHP) said the service provider running PCR tests at the bridge for outbound travellers submitted 136 positive or indeterminate samples on Tuesday, "which far exceeded that of previous days". However, only three of the cases were confirmed as positive upon verification, with nine samples still judged to be indeterminate. The rest were all negative.

Chuang Shuk-kwan, head of the CHP's communicable disease branch, said environmental contamination was the likely cause of the faulty test results.

The testing service provider, Sunrise Diagnostic Centre, has been ordered to carry out thorough sanitisation of its laboratory and all its equipment, and submit a report within a week, Chuang said on Wednesday.

Sunrise Diagnostic had described Tuesday's test results as "abnormal" in its report to the Department of Health.

Under current arrangements, people travelling to the mainland or Macau via land routes have to undergo an on-site PCR nucleic acid test at the Hong Kong border, in addition to presenting proof of a prior negative PCR test. Only those who test negative in both instances are allowed to continue onward.

The false-positive results left travel plans in disarray, with some of those affected remaining at the border checkpoint overnight on Tuesday, demanding answers from Sunrise and a second PCR test.

Shirley Huang, 22, a recent Edinburgh University graduate travelling back home to Shenzhen, was among those stranded. She was trying to make it across the border after two weeks in Hong Kong, where she landed after "trying every method I [could] find just to find a ticket to return home".

Strict Covid-control rules have made travel into the mainland very difficult. For instance, the Hong Kong-Zhuhai-Macau Bridge border has just one counter selling tickets a week in advance, with only 240 available every day.

Huang arrived at the border checkpoint at around 3pm on Tuesday and was administered the on-site PCR test, she told the Post. She was subsequently given a purple band for her wrist, indicating that the result was indeterminate.

She looked around to realise many others around her also had the same bands. 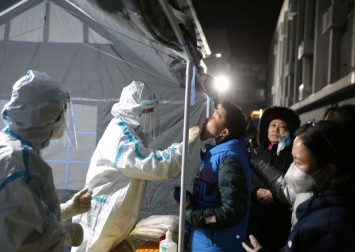 Pico Yu, a fresh graduate from Hong Kong Polytechnic University, was also trying to make his way back to Shenzhen via Zhuhai but ended up among those issued with a purple band.

Not only had his PCR test report from the day before clearly stated he was Covid-negative, but even the two rapid antigen tests he carried out himself before heading to the border on Tuesday morning were also both negative.

"I knew instantly there was something wrong after I got the purple band," said Yu. "A lady standing next to me told me that in order to enter the mainland without a hitch, she had quarantined herself for a whole week, and she had nine negative PCR test results from that time."

Huang stayed at the border overnight after being barred from crossing the bridge but asked the head of the on-site test lab to show her the detailed test results.

"We asked Sunrise to get us tested again. But they said they were off-duty and refused to provide us with another test or offer an explanation," she said. "Today, we gathered at the testing booth to stop travellers with tickets for today from getting tested. Because of this, the staff finally agreed to give us another test."

"I know that passengers with a ticket for Wednesday have smoothly crossed the border while we are still in Hong Kong, not knowing what will happen next," Yu said in a phone interview.

The tickets of the unfortunate 136 have expired, with no word as yet on the way forward for them. Those stranded have been shifted to hotel accommodation arranged by the Hong Kong government, Yu said later on Wednesday, but that was it.

"It's ridiculous that I need to pay for [other people's] mistakes," Yu said.