A farmer in rural China whose third and youngest child has just been admitted to one of China’s notoriously difficult to enter elite schools – the Tsinghua University – attributes their success to hard work – and 17-hour plus school days.

The mother, Shen Yulian, only has a primary school education, but her two older children, both girls, also went to top Chinese universities, one of which is also Tsinghua.

The eldest daughter went to Nanjing University of Information Science and Technology in 2013, the second daughter studied at Tsinghua in 2014, and their son, Liu Zhenao, was admitted to Tsinghua earlier this month.

It’s very rare for students from rural areas in China to gain admission to elite universities, let alone Tsinghua. It is one of the two most prestigious universities in China and is placed at 14 in the QS World University Rankings 2023.

But in the Shen family, who live in the village of Suqian, Jiangsu, eastern China, academic excellence appears to be in the blood.

Shen has been the primary carer for the three children over the past two decades after her husband left home as a migrant worker and only visited home infrequently.

“In terms of education for my three children, I only tell them to be honest and credible and never to steal, rob or be rude to others,” Shen told Jiangsu TV.

Read Also
Chinese father takes daughter, 10, to top school's open day despite her being on an IV drip 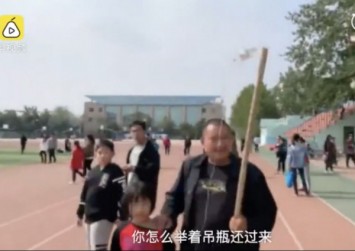 “I just taught them how to be a good person. I have only a primary school education. I can’t help them with their studies. Their good academic results were achieved solely through their own hard work.”

Shen said she was elated that her son has also been accepted into Tsinghua after her younger daughter went there. “I feel like I am in a dream,” she said. “There is a low possibility for a family to have a kid admitted to Tsinghua, but my family has two.”

The mother said when her son was in high school, she sent him to school at 5.30am every morning and picked him up at 11pm every evening.

“It was hard work for me. But thinking of the scores he achieved, I feel happy. It’s like that famous saying, ‘Sunshine comes after the rain’,” said Shen.

Her husband Liu Tongqing described his wife as a “great mother”.

“She deals with everything in the family. I am grateful for her contribution to our family. Without her, we couldn’t be like what we are today,” he said.

The junior Liu said after his sister was enrolled at Tsinghua, his classmates nicknamed him “Liu Tsinghua”.

“That gave me the feeling that if I did not make it to Tsinghua, I would be embarrassed. So I focused on my studies,” he said.

“My parents are both farmers. I am very proud to be raised by them. I am thankful for having such a wonderful mother”.