A Facebook photo of a woman being escorted into an ambulance at the scene of the incident early on Saturday morning.

Hong Kong police on Saturday (Sept 3) arrested a pregnant woman on suspicion of murdering her five-year-old son after she threatened to throw herself off a building in Sham Shui Po and was grabbed by officers and firefighters in a dramatic rescue.

The force later also detained another woman, 40, who is the aunt of the victim and suspected of child neglect.

Officers were called to the scene shortly after midnight on Friday by the mother. They found the boy, who was unconscious, covered in abrasions and bruises, including on his face, Sham Shui Po assistant district commander Lui Che-ho said.

"There are more than 30 injury marks, including abrasions and bruises," said Lui, who is leading the investigation.

The boy was later certified dead at Kwong Wah Hospital in Yau Ma Tei, while the distraught 33-year-old single mother of three was taken to Caritas Medical Centre in Cheung Sha Wan.

Police have classified the case as murder.

The mother was five months' pregnant and also looked after an eight year-old daughter and another three-year-old son in their subdivided flat, Lui said.

He said police suspected the boy had been subjected to months of abuse since the start of the fifth wave of Covid-19 infections, which had forced schools to close earlier this year.

He appeared healthy when in-person classes were still taking place at the start of the year but began missing most lessons when they switched to online learning, Lui said. He did not attend school when physical classes resumed.

"She would use excuses, saying the boy was not home during online classes. She later told the kindergarten he had switched to another school," Lui said.

After making a report to police, the mother threatened to jump off the building when officers arrived.

Footage circulating online shows her dangling from a height on the building's facade at one point, with officers grabbing her by the arms from inside the flat. Firefighters then came to her rescue using an aerial ladder.

Lui said officers were also investigating links between what appeared to be her suicide attempt and her son's death.

He said the boy's development was delayed, which led to temper problems. The assistant commander said investigators suspected that the pandemic, which had forced the boy to remain at home, could have triggered or worsened the situation.

According to neighbours, the mother had kept the boy mostly in their flat away from them, Lui said. His two siblings, who were seen more often by the neighbours, were in good condition, Lui added.

While there was no history of domestic violence, Lui said, the mother suffered from emotional problems after giving birth to her children.

Lui said she had an estranged boyfriend who no longer lived with them but provided the rent for the subdivided flat. 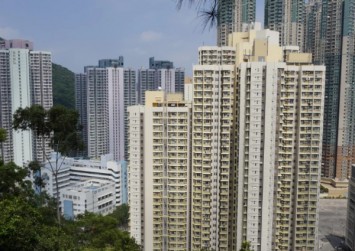 The assistant commander said that as part of their investigation, police had approached the kindergarten and social workers the mother had been avoiding and he would not rule out making more arrests.

Secretary for Labour and Welfare Chris Sun Yuk-han expressed sorrow over the incident, adding the Social Welfare Department was fully cooperating with the police investigation.

The department confirmed that an integrated family service centre run by a non-governmental organisation had been dealing with the family's case. The other two children were now under the care of relatives, it said, adding the department would continue to liaise with the centre and help the family.

In a post on the Labour and Welfare Bureau's Facebook page, Sun said: "Every child should be protected. It is even more painful to see a child with special needs being hurt."

He said the government had already strengthened efforts to protect children, working with different sectors to identify cases, intervene and support those affected as soon as they could.

Dr Fanny Lam Wai-fan, a specialist in developmental-behavioural paediatrics, said it was important for parents of children with developmental delays or special needs to know when to seek help.

She said parents should pay attention to several signs such as trouble falling asleep, feeling anxious or angry when facing their children, obsessive behaviour, and having thoughts of harming themselves or their children.

"If you have these feelings or you feel like your emotions are unstable, you need to seek help," she said.

Lam also suggested parents establish a daily routine when confined at home to give themselves and their children a sense of structure.