Every weekend, Kelvin Ng Wai-hei and his Hong Kong quidditch teammates put makeshift broomsticks between their legs and dash across the field at Happy Valley Sports Ground in pursuit of a "golden snitch".

Ng, 27, a procurer for a skincare company, is coach of the 24-strong team owing to his two years of playing the game, derived from the popular Harry Potter novels.

Three years after the game first arrived in the city, quidditch has not really set the local sporting scene alight and there are occasional difficulties in attracting and retaining players, Ng admits.

"We may get weird looks from people who just see a bunch of people carrying a broomstick around. It's also not helped by the nerdy and bookish image of the Harry Potter books," Ng says. "There is also the lack of a thriving league with different teams and fan clubs, unlike in other sports."

The game began in North America and western Europe in the mid-2000s after the bestselling books about the boy wizard hit the shelves in the late 1990s. 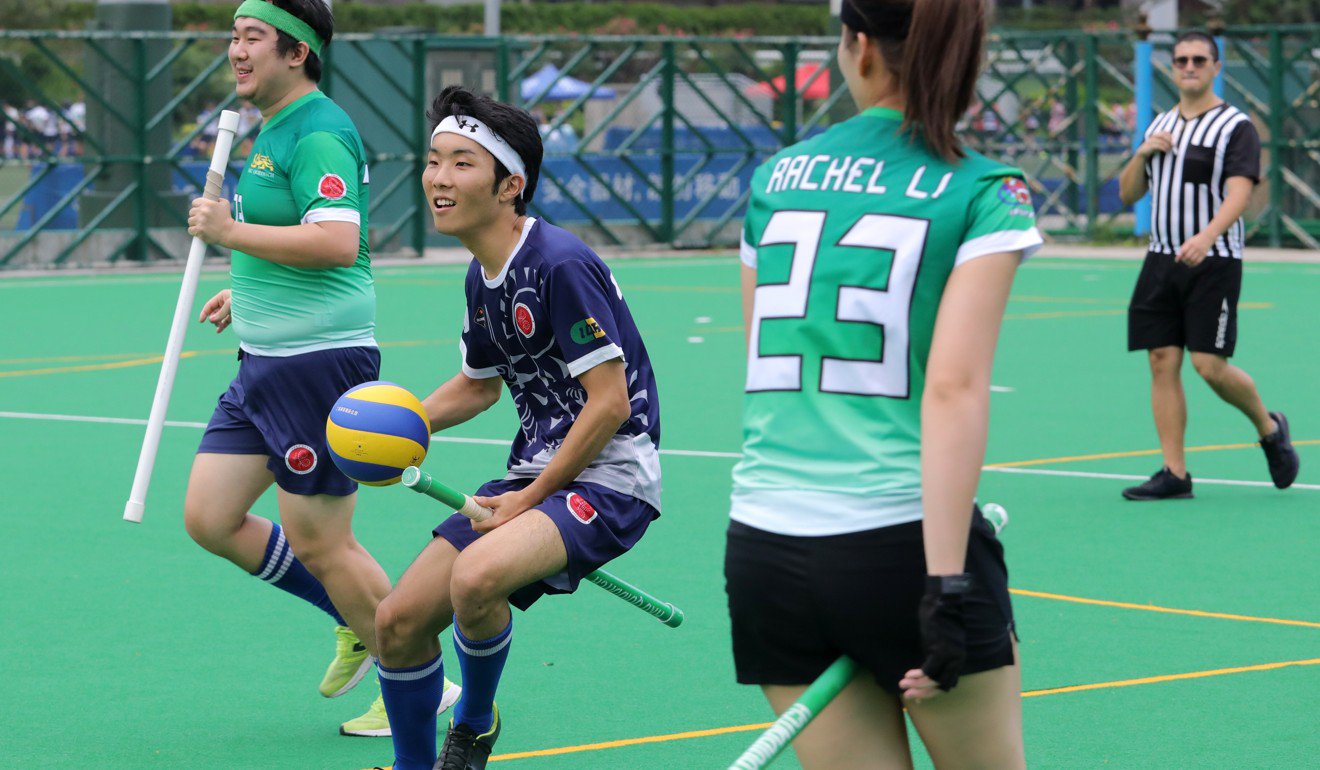 Players must have a 'broomstick' between their legs.Photo: South China Morning Post

Despite being the creation of British novelist J.K. Rowling, the sport has taken on a life of its own and has a well-developed, distinctive set of rules. In a match, two teams of seven, consisting of three chasers (wearing white scarves), two beaters (black scarf), a seeker (yellow scarf) and a keeper (green scarf), compete in what looks like a hybrid of rugby and dodgeball.

Players must hold a "broomstick", usually a plastic tube, between their legs at all times. A team scores 10 points when chasers put a quaffle (a volleyball) through their opponent's hoops at the other end of the pitch.

The game ends and 30 points is awarded to a team when its seeker catches the snitch, a tennis ball attached to the back of a neutral player, who runs around and uses their upper limbs to avoid losing it.

All the while, players have to avoid bludgers (three dodgeballs) thrown by the opposing attackers. If they are hit, they have to go back to their own hoops to resume playing. In the books, bludgers are enchanted objects which fly around to randomly put players on both sides out of the game.

The game arrived locally with the founding of the University of Hong Kong Quidditch Club in 2016. It has since grown into a Hong Kong team with 20 to 30 people attending its open training sessions.

The team recently competed in the Asia-Pacific Quidditch Cup in Seoul, but came last of 10.

Ng hopes to take the team to greater heights and that one day the sport will be taken seriously. "Government recognition would help but we also hope one day quidditch will become a sporting event in international competitions, even the Olympics," he says.

Fourth-year university student Ananya Prasad, 20, says diversity is the sport's greatest strength. Men and women play together and there cannot be more than four people of the same gender playing in a team at any one time in a match. 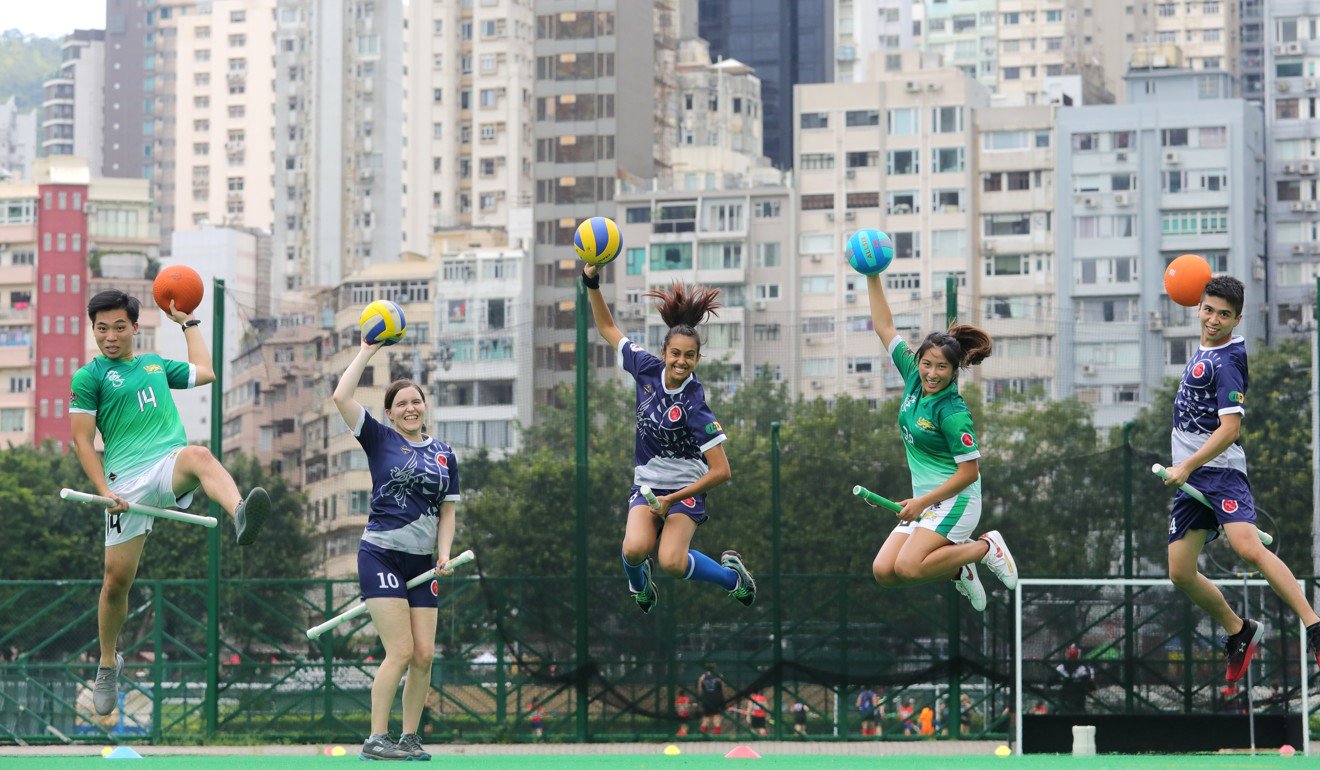 A lot of energy is needed for the game, the players say.Photo: South China Morning Post

"Unlike many other sports that are male-dominated, male and female players complement each other in quidditch," she says.

"What we lack in brute force, women may make up with higher agility and mental dexterity.

"It also boosts my self-esteem a lot when I can play well against big, muscular guys."

As a Hongkonger of Indian descent with limited Cantonese, Prasad says the sport has been a refreshing experience as it is very welcoming to ethnic minorities and foreigners. "We speak English to each other, and only speak Cantonese when we don't want the opposing team to know what we are talking about."

Although Ng has read all the Harry Potter books and watched the accompanying films, he does not see himself as a "massive fan".

"I never realised this game was even on offer in real life until I saw a movie called The Internship," Ng says, referring to a 2013 Hollywood comedy.

"There's a scene where people wear funny clothes and run around holding broomsticks, and after a tryout I have fallen in love with this sport."

Teamwork and tactics count as much as physical strength.

"It takes a lot of energy to run back and forth," Ng says.

"You also have to make quick decisions, such as which opposing player to target and attack with bludgers, if you want to win."