Part of Cathay Pacific’s new ad campaign is displayed at the MTR station in Central.

Hong Kong's railway operator sought to salvage its reputation on Monday by instructing its advertising agency to fully consider diversity in the future, after sparking outrage for refusing to display an advert showing two men holding hands.

But even after shifting the blame to the agency, the MTR Corporation still failed to quell the anger of the city's LGBT community, who said it was not enough to only consider those types of images in the future. They demanded to know whether the operator would now allow the advert in question to be displayed.

"What does it mean that they will consider so in the future? What about [this advert] this time?" said Raymond Chan Chi-chuen, Hong Kong's first openly gay lawmaker.

The advert was part of Cathay Pacific Airways' rebranding campaign called "Move Beyond". It was intended to highlight the airline's attitude to diversity. 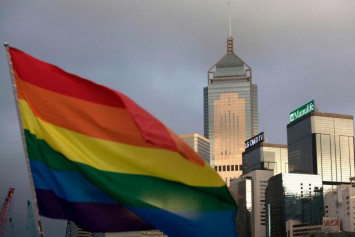 But the Airport Authority, which runs the city's international airport, joined the rail operator in rejecting the sensitive material involved, two sources familiar with the matter have said.

French company JCDecaux was the agency that handled the advert for the MTR Corp.

"We reiterate that the MTR Corporation is committed to equal opportunities in all aspects of its business and supports diversity, and it does not tolerate any form of discrimination on the grounds of gender, sexual orientation or any other factor," the corporation said on Monday.

"The corporation understands the public's concern on the matter. We have immediately communicated with the advertising sales agency and have requested the agency to fully consider the corporation's commitment to equal opportunities and diversity when it considers advertisements in the future."

The corporation had no further comment when asked if the Cathay advert would be displayed at its stations.

JCDecaux said: "Please understand that this is a business decision made in accordance with our procedures. We understand the public's concern on this matter and we will further consider MTR Corporation's commitment to equal opportunities and diversity when we consider advertisements in the future."

On Monday, a spokesman for the Airport Authority said it had "established guidelines" for adverts to be displayed.

"In the airport's environment, one important consideration is given to the fact that [the airport] receives a large number of passengers of all ages with different cultural backgrounds from all over the world," he said.

The advert in question was not submitted to the authority, he said. He did not say if the authority would accept the advert.

Asked if Cathay would use the advert overseas, a spokesman for the airline said: "There are 10 key visuals that we have developed to communicate our new purpose to our people as well as to the public at different times on different channels. This is just the beginning and there are more to come. Stay tuned."

Meanwhile, the LGBT community launched an online campaign condemning the railway and airport operators' refusals to display the advert.

Activists are calling on Hongkongers to take photos of themselves holding a picture of the rejected advert at any MTR station, or at the airport, and then post the photos to social media.

They also encouraged residents of the same sex, whether they are homosexual or heterosexual, to take photos of themselves holding hands and post them on social media.

Chan said he was considering mobilising 1,000 supporters to take photos all at the same time at the airport or at any MTR station.

He called on the Transport and Housing Bureau to offer an explanation on the issue, because the Airport Authority is a statutory body wholly owned by the government. The government is also the majority shareholder of the MTR Corp.

"What's the big deal with two people of the same sex holding hands? Which part of the advertisement is indecent?" Leung said.

"Are the Airport Authority and the MTR saying that people shouldn't be holding hands on the streets if they are of the same sex?"

Among those who have supported the online campaign was Gigi Chao, daughter of real estate tycoon Cecil Chao. Gigi Chao on Monday posted a photo on her Facebook page of herself with another woman as they held up a piece of paper that said "Move Beyond Discrimination".

She made headlines in 2012 when her father offered a HK$500 million (S$87 million) reward to any man who would marry her, even though she was already married to her girlfriend at the time. Two years later, the tycoon doubled the offer to HK$1 billion.

The Equal Opportunities Commission said on Monday: "The EOC is of the opinion that any policy or arrangement relating to censorship of advertising content should be based on sound reasons and solid evidence.

"It seems that the arrangement of the advertisement falls outside the regime of the current discrimination ordinances."

A Transport and Housing Bureau spokesman said the government was committed to promoting equal opportunities for people of different sexual orientations and gender identities.

The government is not involved in the placing of adverts at MTR stations, he said, adding that the bureau had nothing to add to the Airport Authority's statement.