Sleep-sharing capsules in Zhongguancun, a tech hub in Beijing has been shut down, as its validity has been questioned, Beijing Morning Post reported.

Sleep-sharing capsules have popped up in Beijing and Shanghai recently, drawing immediate public attention. Primarily targeted at white-collar workers, the capsules have been mostly set up in office buildings.

To use the capsule, people simply scan a QR code on the outside of each capsule and pay 6 yuan (90 cents) per 30 minutes during off-peak times or 10 yuan ($ 1.47) per half-hour in peak times. 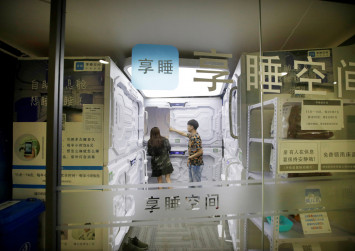 Dai Jiangong, who runs Beijing Xiangshui Technology Corporation that makes the sleeping-sharing capsules, said: "We started to pilot the programme from the end of May. We have not received any seal up notice or rectification proposals from relevant departments. "

"It is the company that decides to temporarily close the capsules to communicate with authorities for long-term development considerations."

He stressed that the company has not officially launched the capsules but was testing them out and gathering users' feedback in Beijing.

The sleeping capsule is not a hotel room or rental bed. It's designed to provide a comfortable space during noon break for white-collar workers in office buildings.

"So we are just open during work shift and closed at nights." he said.

According to Dai, the company will officially launch the sleep-sharing capsules after obtaining approval from relevant departments.

"Real sharing means the users rent out their own free rooms while sleep-sharing capsule is not of this kind," he said.

Zhu Wei stressed that operating hotels requires the approval of departments of industry and commerce, health and fire control, none of which the sleeping-sharing capsule has.

He said there may be hidden security problems. "There may be problems with prostitution, drug abusing, infectious diseases and so on," he said.

In a hotel, the house keeper would clean up and disinfect the entire space when guests leave, but the sleep-sharing capsule does not provide a cleaner each time.

Zhu Wei believes that the sleep-sharing capsule needs to get relevant qualifications to ensure users' health and safety.