Hong Kong police on Thursday launched a new multi-platform hotline for the public to report suspected violations of the Beijing-imposed national security law.

Confirming a Post report last week, members of the public have been invited to share intelligence related to national security related matters via three platforms: SMS, email and WeChat, China’s most influential messaging app, which is popular among the city’s pro-establishment community.

“This hotline is solely for receiving national security-related intelligence such as information, photos, audio or video clips. The hotline will not give any replies or be answered,” the force wrote on its social media platform on Thursday.

Opposition lawmakers had earlier decried the hotline plan, saying it would create a chilling effect on society and destroy interpersonal trust.

A Post reporter who dialled the line on Thursday was asked to leave a message by an English-speaking operator.

The hotline’s launch comes more than four months after the imposition of the sweeping national security law, which outlaws acts of secession, subversion, terrorism and collusion with foreign and external forces, with offenders facing up to life imprisonment.

At least 22 men and six women had so far been arrested by the police force’s new national security unit, which is responsible for collecting intelligence, enforcing operations and investigating offences endangering national security. 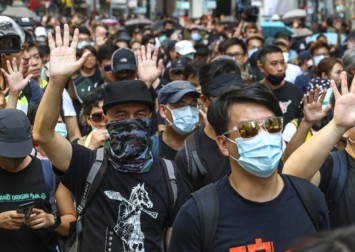 According to police, personal details will not be collected through this hotline. Any intelligence gathered will be processed in accordance with the Personal Data (Privacy) Ordinance and not be disclosed to third parties, they added.

A similar model was adopted last September when police launched an “anti-violence hotline” to gather intelligence from public sources to crack down on the anti-government protests.

More than 1.2 million pieces of information were gathered at the time.

A government source had earlier told the Post the launch of the national security hotline would create a deterrent effect for potential suspects as “there will be eyes and ears everywhere”.

But Democratic Party veteran James To Kun Sun warned the move would discourage Hong Kong residents from sharing their views with others, turning the city into a “muted society”.