'No rush to roll out crash-linked signal system on MTR,' city chief says

Adi Lau said about 100 repair workers were working each shift trying to clear the wreckage of the crash.

Hong Kong's leader said on Tuesday the government would not rush to introduce a new signal system on the city's subway until it was proved to be safe, after a trial run ended in a crash which derailed a carriage, injured a driver and shut down a key link on the network.

Chief Executive Carrie Lam Cheng Yuet-ngor said officials would be similarly cautious with the scandal-plagued Sha Tin-Central link, the next new line set to open on the MTR, which will use a similar system.

City commuters looked set for an extended period of disruption. Officials admitted the challenge of clearing the wreckage from Monday's crash - which happened with no passengers on board - meant they could not say when services would get back to normal. 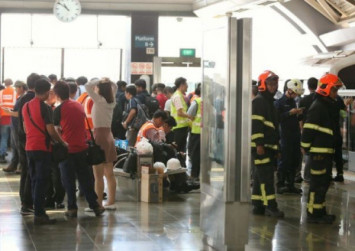 Speaking before her weekly cabinet meeting, Lam said: "I would like to reiterate public safety is of primary concern. So we will not rush to open the Sha Tin-Central link or put in place this new signal system until we are assured of their safety."

She said the government was highly concerned about the crash, for which the MTR Corporation bore "unshirkable responsibility". She said it was lucky the crash happened on a trial run, rather than during normal service.

"If a problem arises in testing, we still have the opportunity and time to rectify it before putting the system in place," she said.

Lam noted the government had already appointed an independent commission of inquiry to look into construction scandals at Hung Hom station on the new link, where major problems have been unearthed over the installation of reinforcement bars.

An interim report from the commission has flagged issues with the MTR Corp's project management, Lam said.

"We have to deal with it in a very robust manner to restore public confidence ... in Hong Kong railways," she said.

The crash happened in Monday's early hours, during overnight tests on the new signalling system. One train hit the middle of another at a crossover section and had its front carriage derailed.

The MTR Corp said it seemed a software problem in the new system could have been to blame.

Speaking to reporters on Tuesday morning, MTR operations director Adi Lau Tin-shing said the train hit in the middle had been separated into two parts, creating space for repair workers to put the derailed carriage of the other train back on the rails for removal.

He said about 100 repair workers were working each shift.

"This process is very challenging because of the limited space inside the tunnel. We can't use heavy lifting equipment to help," Lau said.

"Today we will have a meeting with the contractor to see whether there is any other, more efficient, way to handle it."

He added it would be difficult to set a timeline for when services could resume until the derailed carriage was back on the rails.

Staff have to move the carriage inch by inch to get it in place and doing so, the director admitted, was taking a lot longer than expected.

Lau said the driver of the derailed train hit the emergency button and the train was seen slowing down, but its weight meant it took some time to come to a stop.

While Lau gave no time frame for resumption of normal service, unionist Lam Wai-keung said it could technically happen on Wednesday.

"[The repair works] can be done before the first train on Wednesday," Lam, who chairs the Hong Kong Federation of Railway Trade Unions, said.

Apart from towing the crashed trains away, he said, workers would have to make sure the tracks were in good shape before trains run on them again.

He said it was also uncertain whether the derailed carriage's wheels would still work, but noted there were other ways to move it along the rails.

In the meantime, the rail operator advised commuters to consider other transport or alternative MTR lines.

A spokesman for the Transport Department said its emergency transport coordination centre would closely monitor the traffic situation during the morning rush hour and would keep close contact with public transport operators so that their services could be enhanced quickly whenever and wherever needed.

"We hope commuters will allow more time for travelling and consider taking alternative routes to get to Central," the spokesman said.

For example, those who lived along the Tsuen Wan line and wanted to get to Central could change at Admiralty for the Island line. They could also change at Lai King station for the Tung Chung line to get to Hong Kong station. Alternatively, they could exit at Admiralty station and take a bus or tram.

Another option was to get to Tsim Sha Tsui and then take the Star Ferry to cross the harbour to Central.

"Buses did not seem to help much. We saw the long queues at bus stops during Monday's evening peak hours," Tam said.

"If commuters can be more patient, they might be able to get on an MTR train despite a longer wait at the platform."

Tuesday's disruption forced Hongkongers to come up with different routes for their commute.

One of them was Fletcher Koder, who works at a school in Tai Wai. The 18-year-old usually takes the MTR, but took a taxi from Central on Monday, having heard about the accident from a work email.

On Tuesday morning he took the Island line from Central to Admiralty, to take the Tsuen Wan line from there.

"I'm not familiar with Admiralty station," he said, adding that he hoped services on the section could resume as soon as possible.

Inside Admiralty station at about 7am, passengers could board a train within four minutes. There were only short queues for the train to Kennedy Town.

But teacher Jeff Wong, 35, said the directions were not clear enough, and he was confused about where to go after getting off the train on the Tsuen Wan line. Still, he noted, there were fewer people on the Admiralty platforms than on Monday.

Wong said it had taken him 15 minutes longer than usual to get to Sai Ying Pun a day earlier on the MTR, and he had been worried.

"But I have adapted to the situation after learning about the incident yesterday," the Diamond Hill resident said.

At about 9am, platforms at Central station were crowded. Passengers arriving from the direction of Chai Wan rushed to get to the escalators, some running to avoid congestion.

In Hung Hom, crowds of travellers waited at the bus station to cross the harbour. Some said they had waited 30 minutes for a bus to North Point, on Hong Kong Island.

Danny Leung, on his way from Tseung Kwan O to Quarry Bay to visit a friend, said he chose to take the cross-harbour bus because of the MTR disruption. The 59-year-old clerk said he would have done the 30-minute train journey were it not for the crash.

"It's very inconvenient without the MTR," he said, adding that his travelling time had doubled to about an hour.