Nurses sacked after child dies from wrong medicine in China

Two nurses have been sacked in eastern China after a five-year-old boy died within hours of being given the wrong medication last month.

Zhu Chenyi was admitted with a high fever to the Yixing People's Hospital in Yixing, Jiangsu province, in September and was diagnosed with viral encephalitis with psychotic symptoms, Shanghai-based news site Thepaper.cn reported on Monday.

Instead of giving him medication to ease pressure in the brain as prescribed, the nurses administered an intravenous drip with an antibiotic on September 8, the report said.

Doctors ordered a CAT scan when Chenyi soon appeared to be in discomfort but it did not reveal any abnormalities.

The hospital discharged him to be transferred to the Children's Hospital Affiliated to Suzhou University that afternoon, but went into cardiac arrest on the way.

Despite the father's successful efforts to revive the boy and send him to a closer hospital, the child died that night.

An initial investigation by the Yixing Health Commission determined that two duty nurses did not follow procedure and administered the wrong medicine.

The nurses were sacked and other hospital staff would be punished pending a final investigation, the commission said on Tuesday. 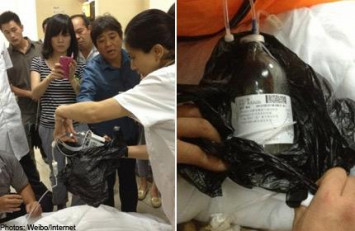 The commission said medical facilities throughout the city had been told to review their medication protocols and reinforce the need for repeated checks and verification.

The hospital and family had "reached an agreement in the aftermath of the incident", it added, without elaborating.

The commission told Thepaper.cn earlier that an independent body was mediating with the hospital and the family, who could sue for medical malpractice if they were not satisfied with the outcome.

According to the report, the family said the hospital maintained that it had only "minor responsibility" for the child's death, but the family disagreed.

The Yixing People's Hospital is rated in the top tier of China's public hospital system.