A social media post by a Chinese Communist Party organ that mocked India’s Covid-19 death toll was deleted after it triggered an intense backlash at home and abroad.

As India continues to grapple with massive surges of Covid-19 cases, Beijing has sought to project the image of a benevolent power abroad, but such efforts have been undermined by agencies that have tried to take advantage of the situation to pump up nationalist sentiment at home.

The image was deleted later that day after it was criticised both at home and abroad for its insensitivity.

The Ministry of Public Security, which has 31 million followers on Weibo, also posted a similar message on Friday comparing the image of an emergency hospital in Wuhan named Huoshenshan (which means fire god mountain), with a photo of a mass cremation ground in India. That post has also been deleted.

Chinese President Xi Jinping sent a message of condolence and solidarity to Indian Prime Minister Narendra Modi on the same day of the Ministry of Public Security’s post and pledged to work with New Delhi to tackle the crisis. The Chinese foreign ministry has also been trying to promote its efforts to send medical supplies to India. 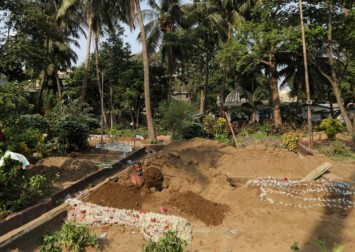 Nationalist sentiment has been running especially high in both China and India since tensions flared along their disputed border last year, including a deadly clash in the Galwan Valley in June .

While many Chinese internet users criticised the posts as insensitive, there were also some who described India as “ungrateful” and “undeserving” of China’s help.

Alka Acharya, former director of the Delhi-based Institute of Chinese Studies think tank, said: “It seems that [the commission’s] post was not vetted or cleared by the Chinese government as it was deleted after social media users reacted sharply to it.”

Acharya said the post had caused a degree of embarrassment and anger.

“Indians should not pay much heed to it because this post was widely criticised and discouraged by a section of Chinese people, and this was certainly not an official post by the Chinese government,” Acharya said.

Kulkarni said India was grateful to China for the humanitarian help that it has provided in its battle against the Covid-19 pandemic: “The quick deletion of the post, combined with the strong criticism that it aroused in many Chinese social media users, shows that it did not enjoy either official or popular endorsement.”

Long Xingchun, president of the Chengdu Institute of World Affairs, said policymakers should not be hijacked by nationalist sentiments.

“These accounts are likely to be managed by staff who are young, who may have negative feelings towards India, but do not have a full understanding of China’s official policy and position.

“The mainstream consensus and official position is that we should support India … Mainstream society and the elites in both countries should not be led astray by these fringe, extreme voices.”