Councillors on the south side of Hong Kong Island have urged tourism bosses to go easy on promoting the district, fearing a heavy influx of visitors could bring more nuisances to an area already inundated with them.

They made their appeal at a Southern District Council meeting on Thursday, when two motions from either side of the city's political divide passed unanimously.

Hong Kong's popularity with tourists - especially those from mainland China - has become a bugbear for local residents across the city, most recently in Kowloon City and Tung Chung. The visitors have been blamed for causing congestion and crowding facilities.

Similar discontent in Southern fuelled Thursday's motion by Liberal Party councillor Fergus Fung Se-goun and 10 others, who said the Hong Kong Tourism Board should not "excessively" promote tourism in the district before traffic conditions and community facilities are improved.

Another motion, by pro-democracy members Henry Chai Man-hon and Au Nok-hin, objected to the board's heavy promotion of picnic sites in the district, saying the influx of tourists was affecting residents' daily lives.

Chai and Au's motion also suggested that Ocean Park, a theme park and major tourist spot in the district, should have to mostly cater to local people, who currently make up 40 per cent of its visitors.

"Excessive promotion may lead to some non-ideal consequences, such as camping on the mountain," Au said, suggesting promotion should only focus on certain spots, such as Stanley.

Chai criticised the tourist board for promoting the district on its website before consulting the council.

Another council member, Paul Zimmerman, said: "The real problem is that the Tourism Board does not take responsibility for the results [of promotion].

Lam Yuk-chun, chairwoman of the council's tourism panel, cited her own constituency, Ap Lei Chau, as an example. "The neighbourhood is not a tourism spot, but groups of visitors often have lunch there, which brings heavy jams to the bridges and roads there," she said.

The councillors raised concerns about two of the board's campaigns, including one that promotes "Hong Kong's Back Garden", which listed beaches and reservoirs in Southern district.

The other was the Hong Kong Neighbourhoods campaign, which was launched in 2017 and has so far featured Sham Shui Po and some historic areas in Central.

The board said it was not certain the district would feature in the campaign. Manson Hung Chung-hing, its general manager of event and product development, told the councillors: "We haven't decided if we will feature Southern district. We are still collecting opinions."

He said feedback from the Sham Shui Po campaign was largely positive. 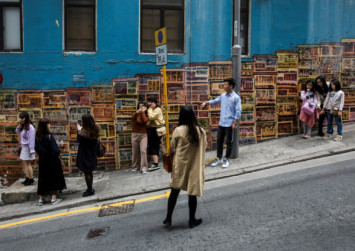 "Small individual shops said their business was better and the district had improved its public hygiene to build a better image," he said.

Hung added after the meeting that the board would consult district councils for three months, and only make a decision at the end of this year or early next year.

A source said the government was keen to promote Southern under the campaign in the coming year, but the board had reservations given the objections in the area.

The meeting also heard of ways the government hoped to lessen the stresses brought by tourists.

Dennis Lo Chun-hong, the Transport Department's acting senior officer in the district, told the meeting that authorities planned to set up new drop-off points for coaches at Beach Road in Repulse Bay - another popular tourist spot - by the end of September.

In 2018, mainland Chinese visitors to Hong Kong reached a record number of more than 50 million, accounting for nearly 80 per cent of the 65 million travellers to the city. The board expected that in 2019 the total number of visitors would increase to more than 66 million, with mainland visitors numbering more than 52 million.