One woman's mission to save Chinese women from joyless marriages

Feng Jinjin (centre) divorced her husband after reading Joy Chen's Do Not Marry Before Age 30 and then married herself in Bali in 2017.

When Feng Jinjin read Joy Chen's Do Not Marry Before Age 30 in 2012, she felt she recognised all the mistakes that the American-Chinese life coach flags up in the book.

"I did everything on her do-not-do list. I married when I was 26. I was too young. I lacked self-confidence. I didn't understand the world or myself," says the former internet advertising manager.

In 2016, the then 33-year-old divorced her husband, who she describes as boring and uncommunicative. She also moved her young daughter to live with her own parents, flew to the US to attend Berkshire Hathaway's shareholders meeting to meet her idol Warren Buffett, and started a new life in Beijing as a free and single entrepreneur.

And then, reader, she married herself.

It was a ceremony prepared with all the formality of a wedding for two. Feng made the surprise announcement with a red-themed engagement party in Shanghai. Looking model-like in a form-fitting dress and an elegant fascinator, she explained to an intimate group of female friends that this was all part of finding and liking herself.

For Chinese couples, a pre-wedding session with a professional wedding photographer is obligatory and so she did that, too, in a spectacular wedding gown and looking like an eager bride-to-be. The actual "wedding" in January 2017 took place at a Bali resort. Around 20 friends bore witness as Feng pledged love and loyalty to Feng. She even brought a traditional red qipao to change into for the meal afterwards, as she would have done at her first, traditional Chinese wedding. Feng even had a traditional pre-wedding session with a professional wedding photographer.Photo: South China Morning Post

Tracey Emin, the British artist, once married a rock. Marrying yourself seems to belong to a whole new category of eccentricity. But perhaps Feng, who says her new guest house business gives her plenty of "me" time, should be congratulated on possibly the most overt expression of individualism that she clearly felt was necessary.

Women's rights in China have followed a convoluted path. On the one hand, the Communist Party has gotten rid of such notorious symbols of oppression as bound feet, arranged marriage and concubines for men. When Mao Zedong famously declared that women "held up half the sky", the party also enshrined gender equality in the constitution. On the other, its one-child policy (1979-2013) led to horrific suffering, with many female infants either abandoned or killed to make room for a son.

For the more fortunate girls, it meant growing up without having to compete with a privileged male sibling for access to education or affection. But on the whole, the country remains a deeply conservative and patriarchal society and women are made early on to dread becoming "leftover women", the Chinese equivalent to "old maids". These values are going head to head against the cornucopia of lifestyle choices that financially independent urbanites such as Feng can now afford. Hers is, after all, the first generation in modern China to be able to wallow in unbridled hedonism, en masse.

It is this muddled context that has given rise to a huge market for lifestyle gurus such as Chen. Books on how to get rich like American billionaires flew off the shelves after China embraced Western capitalism after 1978 (Jack Welch and Buffett were the favourites). Similarly, the confidence, success and glamour associated with third-wave feminism in America is inspiring to a lot of middle class Chinese women. "I identity as a feminist. Feminism is nothing to be ashamed about," Feng says.

Chinese women in their 20s and 30s often do not relate to their own mothers' experiences because the country is vastly different from when the previous generation grew up. While there are prominent local businesswomen who can serve as role models, few are straight-talking, eloquent and proudly feminist. It is risky to be so in China. The country's authoritarian regime arrested a band of activists called the "Feminist Five" in 2015 for daring to protest against widespread harassment on public transport.

For go-getters such as Feng, Chen ticks all the boxes as the perfect role model. She started out in commercial property development, became the deputy mayor of Los Angeles at the age of 31 and then a headhunter who looked for C-suite executives for Fortune 500 companies. She is photogenic and as the daughter of first-generation migrants from China, she embodies both the progressive social values of America and the accessibility of an older sister.

Chen says the idea for Do Not Marry came from a blog she started in 2008 to highlight common workplace faux pax made by new arrivals from China. "As a headhunter, people would complain to me about Chinese women showing up for job interviews in totally inappropriate outfits. Or how new Chinese employees might give their line managers extremely expensive gifts, like a Louis Vuitton bag," she explains. Joy Chen is the author of bestseller Do Not Marry Before Age 30. Photo: South China Morning Post

That blog, which she wrote in English, was translated and reposted widely in China, catching the attention of Citic Press. The major Chinese publisher asked her to write a book about "leftover women" because they sensed a very strong demand for that kind of title from women.

"I thought, are you kidding me? I hadn't learned Chinese then. I was really busy with work. But when I was on maternity leave after my second daughter, I decided to test the water with a blog entry called 'Do Not Marry Before Age 30'. The next day, the blog server crashed because it was overloaded," she says. And so she turned it into a book.

She uses the first person "we" when she addresses her audience, as in "we are the first generation of Chinese women to be able to choose." Isn't that disingenuous?

"I may be American but my background isn't all that different from women in China. I grew up in a very conservative, very traditional Chinese household," she says.

Her parents are both scientists who met while doing their PhD studies in America. Well-educated they may be, but theirs was an unequal partnership which saw her mother playing a subservient role at home.

Her parents also refused to mix with anyone who wasn't Chinese. "When I was 13, I asked my dad why he wasn't going to his office Christmas party. He said he never knew what to say to white people. I realised in that instant that it would forever limit him and that I had to learn to socialise, to learn how to behave by watching people around me. Until then, I was completely cut off and confined within a small Chinese community," she says.

Read Also
Opinion: Waiting for a love that never comes 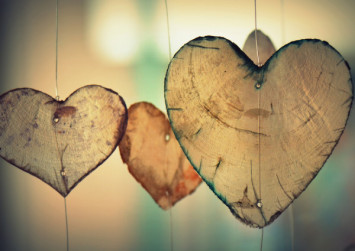 That was the moment when Chen began to live her life purposefully. "She always had a sense of what's needed and what's next," Eric Garcetti, the mayor who worked with her, was quoted as saying in a Wall Street Journal profile of Chen.

She believes you have to make your own luck in work and in love, and her next book was called How to Get Lucky in Your Career.

"I had a string of bad relationships but when I was 37, I met my future husband in a coffee shop and I knew he was the one for me. So I hunted him down like a headhunter. I want women to know they can do that, too," she says.

There is no room for false modesty when selling this kind of advice. She has just launched a slick, 99 yuan (US$15) online video course that mixes career and love advice. She calls the series "Become a Hunter", because "only hunters win in this cutthroat world".

In each 25-minute episode, she constantly reminds viewers in fluent Mandarin why they are paying to watch her: for her career achievements and also, how she has scored full marks when it comes to building a conventional, nuclear family.

The somewhat reactionary assumption that all women want a husband and two kids, like her, sits somewhat oddly with her mission to promote a more open-minded attitude towards gender roles. But in the world's most populous country, where ancient Confucian values on familial hierarchies still hold, there are plenty of women in China who are not bothered by that. Despite divorcing her husband, Feng has not sworn off finding love with someone else.Photo: South China Morning Post

Chen wouldn't say how many copies Do Not Marry sold, citing a confidentiality agreement with the publisher. But some of her free videos have registered over two million views on the miaopai.com platform and her team's tally shows that her content and the interviews she has given to Chinese media have a total of 89 million views from 2012 to 2018. There was even talk of a romantic comedy based on Do Not Marry at one point.

These days, Chen travels frequently from her home in Los Angeles to China, where she is much in demand for her motivational talks. Since 2012, she has given 80 to 100 talks across the country, including one in February in Shenzhen that was organised by Lean In China, a platform for promoting women's development that was founded in 2013 in answer to Sheryl Sandberg's global movement.

Angela Li is a member of the Lean In circle in Beijing and another of Chen's acolytes. Her background is unusual. Abandoned by her birth parents when she was seven, she was adopted by an American couple working for a charity in Yunnan province, who provided a loving home. She is a bilingual, well-educated and cosmopolitan. But still, she says she lacks confidence, and memories of her early years have left her with post-traumatic stress disorder.

"I read Joy's blogs initially and moved on to her books. Later, I got to meet her and I am so lucky to have found a teacher who can really help me. Women need to hear things like 'If you are buying a car, would you buy the first one that you see? So why do that with marriage?'" she says. Her work in social enterprises has also benefited from her career advice, she adds.

Feng has not sworn off love with someone else. She has been dating casually and hopes to meet someone more suited as a partner than her ex-husband. "Our parents had little choice. Now, we are saying, we just want the same opportunities as men," she says.