Out of luck: Chinese passenger who threw coins at plane ordered to pay damages

A 28-year-old man in southeast China was ordered to pay 120,000 yuan (S$23,000) in damages to budget carrier Lucky Air for throwing coins at a plane in the hope of a safe journey last year.

Yixiu District People's Court in Anqing, Anhui province, handed down the order in July, but it was only made public recently, when the court posted the ruling online.

Lu Chao, who was a first-time flier, admitted throwing the coins at the plane for luck as he boarded on February 17.

The flight - from Anqing to Kunming, Yunnan province - was cancelled after airline staff found two 1 yuan coins on the ground near one of the plane's engines.

All passengers had to leave the plane and it was grounded while it underwent safety checks.

Kunming-based Lucky Air had to arrange accommodation for stranded passengers and replacement flights as a result of the incident and incurred losses of more than 123,000 yuan.

Lu, meanwhile, was taken away by Anqing police and detained for 10 days on charges of disturbing public order.

Lucky Air filed a civil lawsuit against Lu in May, demanding compensation for its losses.

Lu, who was represented by his brother in court, argued that the airline's maintenance costs were too high and that Lucky Air should have made a public announcement before boarding to remind passengers that they should not throw coins at planes.

Lu said he could not afford to cover the airline's losses, according to the court documents. The court ruled that he should compensate Lucky Air in full, but halved the court costs to 459 yuan.

There have been a number of similar incidents at airports in China in recent years, and it was the second known court case involving a "lucky coin toss" passenger.

A man who threw coins at the engine when boarding a flight from Wuhan, Hubei province, to Shenyang, Liaoning, in July 2017 was sued by the carrier, Shenzhen Airlines.

The airline was seeking 70,000 yuan in compensation, and the man eventually agreed to pay 50,000 yuan to settle the case. 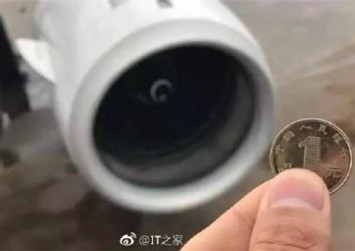 Such incidents prompted the Sanya Phoenix International Airport, on tropical Hainan Island, to put up a notice in June warning passengers not to throw coins at planes.

The warning - which said tossing coins at a plane was against the law and would actually harm prayers for protection - was displayed on a screen located before the security check area. The airport later took the message down.

In a case in September, a medical school student who threw coins onto the parking apron as she got off a plane in Xichang, Sichuan province, was fined 200 yuan.

The 23-year-old woman said she did so to bring her cousin's baby good luck after the child became ill during the flight.

And in April alone, there were three reported cases of Chinese passengers tossing coins for luck at airports - in Hohhot, Inner Mongolia, Wuhan in Hubei, and in Bangkok.