A Chinese travel influencer who rode on a sedan chair has been criticised online, however, the bearers defended him, saying critics are hurting their income.

A Chinese travel influencer has been attacked online after hiring men to carry him up a mountain in a sedan chair, with many accusing him of "spending money to trample on the bearers' dignity" and "paying money to humiliate others".

Sedan chairs, enclosed chairs mounted on horizontal poles and carried on the shoulders of two porters, are common in tour areas in mainland China, especially for people who have difficulty navigating tough terrain.

But this human-powered form of transport, which has been in use in various forms since early antiquity, also makes many people uncomfortable and serves as a reminder of the exploitation of peasants by wealthy landlords in ancient China.

It is also seen as a racist form of colonial oppression in much of Asia, where Europeans often used local people to carry them about in sedan chairs.

On the weekend, a Chongqing-based tour influencer posted a video about a geological park in Wulong county, southwest China.

The man, in his 20s, hired a sedan chair, called a huagan in southwestern China, to help the bearers after being told they had not had any customers for some time despite there being many tourists in the park.

The influencer, known online by the pseudonym Xinyu, sat in the chair for half the journey and gave the two porters 600 yuan (S$121.98), more than the 400-yuan price they normally charged.

He also said he had experienced the hardship of being a bearer by swapping roles with one of them and carried the litter.

He said his shoulders ached badly afterwards from the weight of the chair pressing down on him.

Despite Xinyu's stated good intentions, many who saw the video were angered by his decision to use the transport.

"You looked so cosy sitting in the chair and drinking beverages while the workers were panting from carrying you on their shoulders. What a superior attitude you have!" one person wrote.

"Everybody is born as a human being. Why do you suppose you can spend money to trample on others' dignity?" another user said.

"I feel sad seeing this scene. I think the tourists sitting in the chair don't treat the workers as human beings. It's better to cancel this service," another comment read.

A worker, surnamed Ni, featured in the video said young people dared not use sedan chairs for fear of abuse on the internet.

"I have an 80-year-old mother and a teenage daughter to support. My wife doesn't work. So I am the only breadwinner of my family," he said in the video.

"This job is laborious. But I am proud of it because I earn money with my own strength.

"I don't know why the public forces us out of a job. Is there anything we've done wrong?"

A manager from the Chongqing tour zone said they have 68 huagan workers, all of whom are local farmers. 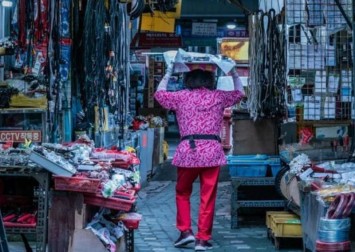 These workers earn around 50,000 yuan (US$7,300) a year, more than the income from their agricultural work, the Qilu Evening News reported.

There were some voices on the internet who supported the influencer.

"Every occupation should be respected. The efforts of every person who tries hard to live should be acknowledged," a user said on Douyin.

"If you don't sit and I don't sit in the sedan chair, how can those workers earn money and raise their families?"

"Huagan is like a taxi. You are just a passenger, not a landlord in ancient society," another user wrote.