'Planned marriage next year': Chinese man, 23, who survived massive quake in 2008, dies battling forest fire and made a 'martyr'

Cai Maoqiang was honoured as a “martyr” after he died in a forest fire.

A firefighter who was pulled from the debris of the devastating 2008 Sichuan earthquake by rescuers as a boy was honoured as a martyr after he died last week battling a forest fire in central China, according to official media.

He was trapped in a sudden fireball while fire crews were retreating from the area last Friday. Another firefighter, Xiao Jianqiang, also died at the scene.

Fourteen years ago, a nine-year-old Cai and his parents were buried under their collapsed house in Wenchuan county, Sichuan province in southwestern China, when a magnitude-8 earthquake hit the region.

They were saved by a group of armed police sent as part of the rescue team.

The boy grew up to become a firefighter in 2019 and since then he had taken part in efforts to tackle 14 forest fires and involved in six other rescue missions.

"It's my responsibility to head for danger," he was quoted as saying once.

According to his close friend, surnamed Deng, Cai had planned to get married next year.

"He told me he would marry his girlfriend next year, and asked me to go for an apartment viewing together with him," said Deng, recalling the last time he saw him earlier this month.

"He was supposed to resign around this time next year," Deng added.

Cai was among reinforcements dispatched from Sichuan to Hunan three days after the fire broke out.

He left his last social media post on WeChat on Oct 20 before he arrived at the area. It read, "30 seconds away from the battlefield." 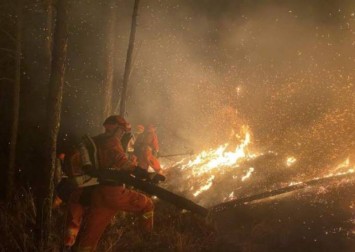 Both Cai and Xiao were named martyrs by authorities earlier this week.

Altogether, 111 firefighters died at an average age of 28 between March 2018 and March 2022, according to a statement from the Ministry of Emergency Management issued in April.

In an unusually disastrous forest fire in the mountains of Sichuan in the spring of 2019, 30 first responders died after being trapped in a huge fireball caused by a sudden change of wind direction.

Another 104 died battling fires caused by a massive chemical explosion in the port city of Tianjin in northern China in 2015.