Twin sisters were arrested in China for swapping passports.

Police in northern China arrested twin sisters accused of routinely switching their passports to help one another leave the country dozens of times.

One of them, Zhou Mouhong, is married to a Japanese man, but when her visa to leave China was denied, she turned to her sister, Zhou Mouwei, whose visa to Japan was approved, for help, said the police in an announcement about the case.

Because the twins, from Harbin in Heilongjiang province, look remarkably similar, Zhou Mouhong was able to pass off as her twin and is accused of travelling to Japan and Russia (where her twin also had a valid visa) under the false identity.

Police said she was able to leave China more than 30 times before authorities caught her. The police did not disclose the women's ages or how officers managed to expose the scam.

As for her sister, Zhou Mouwei, she also took advantage of their similar appearances and entered Thailand and a number of countries four times, pretending to be Zhou Mouhong.

According to Wang Xiaodong, a local police officer from the immigration management department, Zhou Mouhong had been trying to reunite with her husband because he had returned to Japan.

According to the police, they discovered the twin sisters' illegal overseas travel history at the beginning of this year and ordered them to return to China in late May.

Wang, the police officer, told the women it was illegal to "take advantage of your DNA" to travel.

Read Also
Caught in the act: 8 people spotted at JB checkpoint sneaking past borders into Malaysia 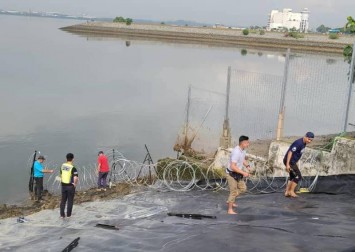 "You can inquire with immigration authorities about your passport issues, but you cannot travel abroad using someone else's passport," Wang said.

Currently, the police are investigating the women for the crime of "disrupting the administration of the territory or border".

According to National Business Daily, a lawyer said that, because the two sisters sneaked across the border with other people's passports more than three times, they could be sentenced to less than a year in prison or fined.

Many people online were surprised with how often their "trick" worked and wondered how the police even figured the scam out.

Another person offered a theory as to how they were caught, commenting: "My guess is that the Covid-19 epidemic prevention measures found the anomalies when a person who was supposed to be in another country was still using her ID card domestically for getting vaccinations or taking PCR tests."