Police were called after a couple in eastern China ignored their neighbours’ complaints about the thousands of bees they kept on the balcony of their high-rise flat.

Police were called to a high-rise residential building in eastern China after a couple ignored repeated complaints from neighbours about their thousands of pet bees.

The unnamed couple from the coastal city of Ningbo, Zhejiang province, installed a beehive on the balcony of their flat to use their stings for medicinal purposes, but the population expanded rapidly to around 10,000 bees, according to ﻿Ningbo Evening News.

"To other residents in the complex, this is a ticking bomb. What happens if someone gets stung, have you thought about that?" a police officer was quoted as telling the wife, who was at home when the police visited on March 29.

Neighbours had been complaining for more than a year about bees congregating outside their flats, with the swarm's droppings staining clothes hung out to dry. Property management staff called the police after failing several times to persuade the couple to remove the insects, the newspaper reported. 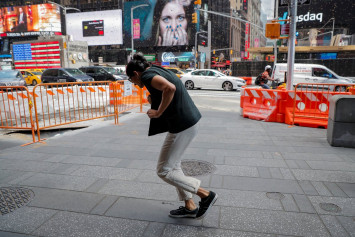 "Being stung is not a big deal. I've been stung a few times and nothing happened," the woman was reported to have told police.

"We have grown attached to these bees, we don't want to move them," she said, explaining that she and her husband regarded the insects as pets.

"Bee treatment" has become popular in recent years as a form of traditional Chinese medicine. The insect's sting is used to treat illnesses such as rheumatoid arthritis by being applied to the affected joints. However, there is a lack of research on the effectiveness of such treatment.

"You can even keep dinosaurs if you want, but only on the condition you do not affect other people," a user from Guangxi Zhuang autonomous region wrote.