Footage of the attack circulated widely in China.

A deputy police chief has been sacked and five others placed under investigation following an attack on a group of women in the northern Chinese city of Tangshan earlier this month that caused widespread public outrage.

The four diners were attacked by a group of nine people at a barbecue restaurant after one of them rejected a man’s advances.

In an official notice published on Tuesday, Hebei’s discipline inspection and supervision authority said it had “carried out in-depth investigations into untimely police dispatch, irregular law enforcement and serious violations of discipline and law” – the last of which is commonly used as a euphemism for corruption.

The notice said five officers, including the Lubei district police chief Ma Aijun had been placed under investigation.

The police also announced that Ma’s deputy, only identified by his surname Li, had been dismissed from his post.

Government records previously published in local media have shown that one of the suspects in the case, Chen Jizhi, had previously been named as a fugitive in a court case concerning a 2015 assault and had been blacklisted as a dishonest debtor.

Security camera footage from the June 10 incident shows a man entering the restaurant in the city in Hebei province and walking over to a group of four women.

He then appears to speak to one of them and put his hand on her back. She pushes him away twice, upon which he slaps her and gets into a fight with the others at the table.

The other men then rush into the shop and assault the women, kicking them and throwing a chair before dragging them outside to continue the beating. 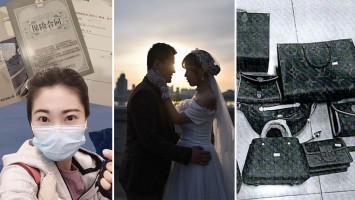 Nine suspects – including two women – have been detained in connection with the case.

Two of the women were hospitalised after the assault, but little further information has been given about their condition. A few days ago rumours started circulating on social media that they had since died, prompting calls from media outlets for greater transparency.

On Monday the city authorities said the two women had left hospital, while the other two had suffered minor injuries that did not need hospital treatment.

Two days after the attack, the local government launched a “blitz” against criminal gangs . It urged citizens to report any problems and promised that every tip-off would be investigated.

Residents queued in front of the Tangshan police bureau to report their problems after the campaign was announced, with some telling news outlets that they had to wait for over four hours to meet officials.