A police officer used a baton to smash a car window and subdue a driver who tried to escape after being intercepted in Hong Kong on Monday night.

The man was driving the Honda vehicle along Po Shek Wu Road near Sheung Shui station just after 11pm when an automatic number plate recognition camera scan found the car's licence had expired.

Police intercepted the car at the junction with Choi Yuen Road.

"The driver refused to co-operate and tried to drive off. He rammed into a police car and a taxi," a police statement said. 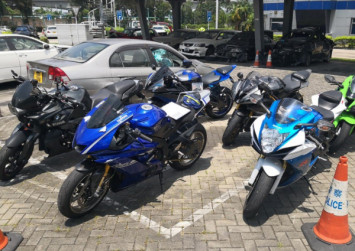 As the driver repeatedly tried to ram his way through the police roadblock, ignoring verbal warnings, an officer used a baton to break the front right window of the car, and subdued the driver.

Police arrested the 22-year-old man for three traffic offences, including driving without a licence and third-party insurance and driving an unlicensed vehicle. The man passed a breathalyser test. His car was towed away for examination as police suspect it had been illegally modified.

The officer suffered minor hand injuries and was taken to North District Hospital for treatment.

The suspect was still being held for questioning on Tuesday and had not been charged.