Staff inside Sheung Shui slaughterhouse ahead of the cull.

Hong Kong launched its largest pig cull in more than 50 years on Monday in a drastic effort to prevent an outbreak of African swine fever, while pork traders were hopeful supplies of the staple meat could be partially resumed as early as Thursday.

About half of 6,000 pigs at the Sheung Shui abattoir were due to be slaughtered by late Monday night, and the rest by Tuesday if everything went smoothly, according to the Food and Environmental Hygiene Department.

The cull came after officials on Friday confirmed the city's first case of African swine fever, which was found in a pig imported from Zhanjiang, in mainland China's Guangdong province.

While officials described the scale as the biggest since the city's 1997 handover to Chinese sovereignty, a pork industry veteran confirmed it was the largest slaughter of pigs - mostly imported from the mainland - in more than half a century. 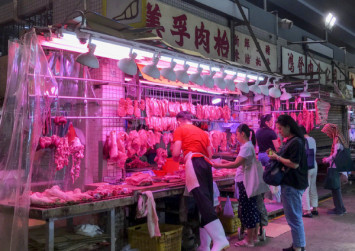 It began shortly after 2pm, following preparations in the morning by workers in protective gear. That included taking a full inventory so that affected traders could be properly compensated.

A department spokeswoman said the pigs were being put down by electrocution, in keeping with the usual practice at the facility. The carcasses would then be individually wrapped in plastic bags and sent to the Ta Kwu Ling landfill in the northeast New Territories.

In a related development, mainland authorities had completed an investigation into the case involving the pig imported from Zhanjiang, according to a source.

Hui Wai-kin of the Pork Traders General Association said on a radio programme in the morning that the total compensation bill for the mass slaughter would be close to HK$20 million (S$3.4 million).

Supplies of fresh pork in the city had been disrupted since Saturday, after the mainland suspended the transport of all live pigs to Hong Kong.

video clip from a reader showing scenes inside the Sheung Shui Slaughterhouse on Monday morning, time before the cull operation began in the afternoon. pic.twitter.com/MqoQ5Gdw7d

Prices of fresh pork soared by as much as 40 per cent on Saturday, when there were still limited supplies. But by Monday, shoppers were unable to find any in the city's wet markets.

The Sheung Shui slaughterhouse, which handles most of the pigs imported from the mainland, suspended operations for the culling and a thorough disinfection of the facility.

The department said at least two rounds of thorough cleansing would have to be conducted, followed by veterinary inspections, before the abattoir could be reopened - probably on Monday.

A privately owned slaughterhouse in Tsuen Wan had also temporarily halted operations since the weekend, although the virus, which is fatal to pigs, had not been found there.

While Hui expected fresh pork supplies to resume at normal levels by next Monday, he said the industry hoped to restart operations at the Tsuen Wan facility by Thursday or Friday this week.

"A lot will need to be discussed to determine whether we can do it," he said.

The industry veteran was hopeful the Tsuen Wan slaughterhouse might process more pigs than the usual 400 to 500 a day so that at least half of the city's fresh pork supply could be resumed. But it would mean a greater workload and additional transport arrangements, he added.

"We hope the facility will handle about 50 per cent of the fresh pork supply, to help meet the demand in the market," Hui said.

The crisis is more of an economic issue than a food safety problem as African swine fever does not pose a risk to humans, but the virus that causes it is highly contagious among domestic and wild pigs, and can wipe out livestock.

Kwan Kwok-wa, vice-chairman of Fresh Meat United, another traders' group, was hopeful the disinfection of the Sheung Shui abattoir would be completed by this weekend.

"We hope live pigs will be delivered on Saturday, so Hong Kong can have fresh pork for Sunday," Kwan said.

Animal rights organisations Hong Kong Pig Save and Hong Kong Wild Boar Concern Group have raised animal cruelty concerns over the cull. They are demanding Secretary for Food and Health Professor Sophia Chan Siu-chee and the Society for the Prevention of Cruelty to Animals provide more details of the operation.