Being a bridesmaid in China is so dangerous that couples have turned to hiring professionals instead, following an increasingly worrying slew of bridesmaids being abused and harassed at weddings.

One common practice at weddings in China is that of 'nao hun' - or 'creating turbulence'. In 'nao hun', the wedding guests 'tease' the newlywed couple and their bridesmaids. Traditionally, doing so is believed to liven up the atmosphere at the wedding.

However, the activities, which include bridesmaids drinking wine on behalf of the bride and groomsmen performing stunts with sexual innuendo, often get out of hand.

In the latest incident, a bridesmaid was sexually assaulted by a groomsman and the best man while they were on the way to the wedding ceremony. A video circulating on Chinese social media showed the bridesmaid being groped by the two men, despite her protests.

The men were later arrested by Xi'an police.

A bridesmaid also made headlines last year when she died from over-consuming alcohol, and actress Liu Yan was almost thrown into the water by groomsmen at a celebrity couple's wedding whom she was a bridesmaid for.

Other bridesmaids have also spoken out about being molested or stripped during wedding games.

As a result of all the horror stories, brides-to-be are finding it increasingly difficult to invite friends to act as their bridesmaids. Some potential bridesmaids decide to draw up 'no wedding teasing contracts' which lay out ground rules to protect themselves before they agree to participate in a wedding, reported cjn.cn.

However, other brides have resorted to hiring professional bridesmaids instead.

According to Business Insider, more than 50 wedding planning firms now offer professional bridesmaids as part of their wedding packages.

Being a hired bridesmaid does not spare them from the wedding games or stunts, though. Besides acting as the make-up artist, the hired bridesmaid has to gamely take part in the activities and also help to build up the atmosphere at the wedding, no matter how demeaning the tasks might be.

Read Also
Bridesmaids who were proposed to at their bestie's weddings 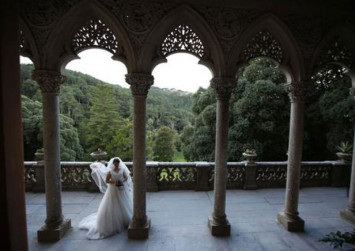 Depending on the "difficulty" of the services they provide, a professional bridesmaid is paid between 200 yuan (S$40.60) and 800 yuan per wedding, according to Baike.com.

While hiring professionals might fill the temporary need for bridesmaids, it does not resolve the underlying problem: the normalisation of bridesmaids being harassed while participating in wedding proceedings. Until such a mindset is done away with, bridesmaids - professional or not - will still be subject to harassment and assault.