Topless waiters, a local authority refusing to have staff work overtime so couples can marry on a supposedly auspicious day for weddings, and a company whose name suggests it doesn’t like to work are just some of the quirky stories making the news in China this month.

A civil affairs department in southeast China refused requests from young couples wanting to register their marriage on March 14, because it is not a traditional working day.

The date this year is seen as an auspicious one for couples to tie the knot because when strung together, the Chinese characters for date 2021314 look like those for “love you my whole life”.

The website of the Civil Affairs Bureau of Huaining county, in the southeastern province of Anhui, has seen couples posting online asking for officials to work on that day, despite it being a Sunday.

However, it refused the requests and reminded people of the dangers of large crowds congregating during the Covid-19 pandemic.

A spokeswoman for the Anhui Provincial Civil Affairs Department said it had left the decision on whether to allow officials to work overtime on March 14 to local authorities, The Beijing News reported.

The Chinese hashtag that in English is #governmentrefusestoworkovertimeMarch14 has been viewed more than 640 million times on Weibo, China’s Twitter.

More than 20,000 comments were left on the website, with most users supporting the government’s refusal.

“You let others work extra hours to benefit you so that you can get married on a so-called lucky day. Who do you think you are?” wrote one person.

Some couples from Guangzhou, in Guangdong province in the country’s south, said they also wanted to register their marriage on March 14, after failing to secure a spot on Valentine’s Day, Feb 14, because it fell during the week-long Lunar New Year holiday.

In Chinese, the pronunciation of certain numbers when put together sounds like expressions of love and hold a particular fascination for many residents.

It is common practice for men to send red envelopes containing 520 yuan (S$107) to their girlfriends or wives because the number, when spoken, sounds like “I love you”. For that reason, May 20 is a highly popular date also for couples to get married.

The number nine means “eternal” in Chinese culture, so September 9 of each year sees a stampede of couples saying “I do” across the country.

A hotpot restaurant which has male topless models as its waiters has sparked controversy and turned into a viral hit.

Over the past two months, between six and eight male waiters strut around shirtless in the restaurant in Xian, the capital of the northwestern Shaanxi province, from 5pm to 11pm every day.

The muscled waiters are all part-time models so are happy to pose for photos or videos with guests, who often invite the men to join them for dinner.

“These male waiters are all good-looking and are in good shape,” Ma Yu, the restaurant owner, said. “I hope to bring visual enjoyment and a pleasant experience to all the customers.”

Ma said takings were up since the quirky marketing strategy was introduced, with women making up a majority of the restaurant’s client base.

However, the use of the shirtless male models has attracted a mixed response online.

“It’s nothing wrong that people on one side are OK to expose themselves while those on the other side like to consume,” wrote one person on social media site bilibili.com.

Another user wasn’t happy, saying: “It’s more or less disgusting. I can smell their underarm odour.”

A reader at news portal 163.com said topless male waiters should be banned. “Sometimes kids will eat in the restaurant. The existence of topless waiters will affect kids’ values towards both genders,” the reader wrote.

A government department has told a Chinese advertisement and cultural activities design company to change its name because it translates to “don’t like to work” in English.

Jiu Bu Ai Shang Ban, based in Wuhan, in Hubei province, central China, caught the public’s attention after officials from the local administration said its name was not in line with the new Enterprise Name Registration and Management rule and would reflect on it badly, the Yangtze Daily reported.

The rule, which came into effect this month, stipulates that a company’s name should not use words that could damage public interest or social order, oppose customs, be malicious or mislead the public.

Read Also
'I don't': why China's millennials are saying no to marriage 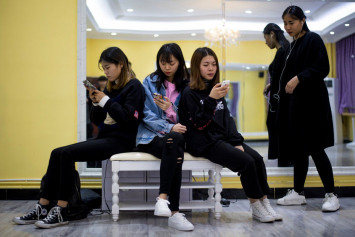 Ye Qing, a professor from the Zhongnan University of Economics and Law in Wuhan, said he agreed with the authority’s ruling, as the name constituted “bad guidance” for society, the newspaper reported.

“It lacks positive energy,” said one user on Weibo. But many internet users do not agree with the decision.

“It’s none of the authority’s business,” wrote another Weibo user. “This name does not oppose the government. It is neither pornographic nor violent. I don’t understand why it is not proper enough.”

Another person said: “Why did the government require them to change the name? Does it mean the authorities forbid people to hate work?”

Liu Han, the company’s owner, told the newspaper that he would follow the order to change his company’s name.