A private zoo in Taizhou, Jiangsu, southeastern China, is under fire after some of its employees were caught putting make-up on monkeys in live streams to try and sell cosmetics.

Some videos showed a female zoo worker applying make-up around a monkey's eyes to sell cosmetic products. Several monkeys were seen in the video wearing diapers, taking a bath, eating strawberries and durian.

"I understand that the video producer aims to attract fans by giving monkeys special treatment. But it is not in line with our values. They shouldn't only focus on attracting viewers without considering the social impact," the whistle-blower said.

The authority told the zoo to take the videos off the internet and banned it from using monkeys in live-streaming again.

A Chinese woman has been dubbed the "face mask superwoman" after a video clip appeared online showing her wearing a beauty facial mask and calmly helping her neighbour put out a fire. 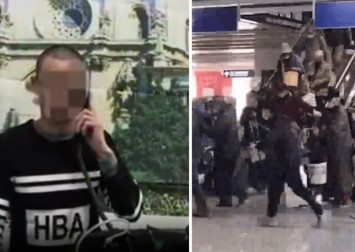 The fire broke out in an apartment building in Hangzhou, Zhejiang, eastern China, at the end of last month, Qianjiang Evening News reported.

After hearing someone shouting "there is a fire" outside her flat, Zhang Dandan quickly took a fire extinguisher to help, forgetting that she was still wearing a facial mask.

She skilfully raised the extinguisher towards the flame, a corridor surveillance video showed. When the extinguisher was almost finished, Zhang asked her neighbour to fetch another one from her home.

It took Zhang five minutes and two extinguishers to put out the fire, believed to have been caused by home appliances.

"When I recalled the incident, I felt it was a bit risky," Zhang said.

She said she managed to put out the fire thanks to regular firefighting drills at her workplace.

The market supervision authority in Nanchang, Jiangxi, eastern China, is investigating a company selling health products after claims its ads are sexist.

The advertisements from Huiren Shenbao targeting male customers claim its products can help improve the function of their kidneys.

Some months later, it released another ad claiming that "as a matter of fact, women practise yoga only for men".

These two posts have been deleted from the company's Weibo account, but screenshots are being widely circulated online. The market authority ordered it to take action to address public concern over the content of the ads.