Raw sewage from Chinese fishing vessels is killing South China Sea coral reefs and can be seen from space, claims US firm

A handout photo. A slide from Simularity’s presentation showing ships (left) and concentration of chlorophyll-a (right)on on June 17, 2021.

“When the ships don’t move, the poop piles up,” said Liz Derr, the CEO of Simularity, a firm that specialises in analysing satellite imagery and has been monitoring more than 200 Chinese fishing vessels anchored for months in Philippine- claimed waters near the Spratly Islands.

“The sewage from the anchored ships in the Spratlys is damaging the reefs and we can see this from space,” Derr told a digital forum hosted by the Manila think tank Stratbase ADR Institute on Monday.

The latest images showed for the first time a link between the heavy, constant presence of Chinese fishing vessels in the area and the degradation of the surrounding marine environment, Derr said.

Derr explained that sewage effluent encouraged microscopic algae known as phytoplankton to multiply rapidly. This enabled her firm to monitor the sewage output of Chinese vessels as the phytoplankton contained chlorophyll-A, a bacterial pigment that showed up as white patches in multispectral imaging.

To show the “dramatic” changes in algal growth, Derr compared multispectral images of the waters surrounding five reefs: Union Bank, Johnson South, Landsdowne, Ross and Collins. The images were taken on two dates: May 14, 2016, when there was little algal growth and June 17, 2021, when 236 Chinese fishing vessels were recorded staying motionless in the waters.

The period spans the presidency of Rodrigo Duterte , who controversially set aside a 2016 ruling by an international arbitral court that sided with the Philippines over China in their territorial dispute over the South China Sea to pursue better relations with Beijing.

Derr warned that continued degradation could have severe consequences, noting that “coral reef fishes supply a major source of protein for about 85 per cent of coastal inhabitants”.

Derr is not the first expert to warn about the effects of waste water on coral reefs in the sea.

Last April, ex-US navy captain Carl Schuster, now a professor in the Diplomacy and Military Science Programme of Hawaii Pacific University, estimated the 200-plus Chinese vessels anchored near Union Banks were each generating 10 pounds of waste a day, or 2,000 pounds in total. 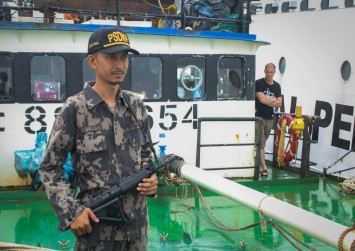 “That’s 200 metric tonnes of waste a month in a concentrated area …. the environmental damage might not be apparent for months but it’s ongoing,” the former operations director of the US Pacific Command’s Joint Intelligence Centre told a Zoom forum hosted by a Philippine youth group.

On Tuesday, Philippine Defence Secretary Delfin Lorenzana reacted to Derr’s report saying, “while we have yet to confirm this waste has reached our waters, such irresponsible acts, if true, would undoubtedly cause grave damage to the marine ecology in the region”.

However, he said his department was still verifying Simularity’s report amid criticisms that one of the photos used in Derr’s presentation was of “a ship on the Great Barrier Reef in Australia” taken in 2014.

The photo had appeared in Derr’s presentation as an illustration of a ship disgorging bilge water above a disclaimer that it was an “unknown ship”.