If Song Hongmei could live her life again, the candid 36-year-old from southwest China would not marry a Hong Kong man and endure years of trying to make the city her home.

It is not that her husband, a taxi driver 17 years her senior, has not treated her well. The two have been happily married since 2008 and have two children, a boy, 10, and a girl, four.

Rather, the ordeal of immigration red tape mainland Chinese people must contend with, as well as unrelenting hostility from some Hongkongers, has led her to conclude it might have been better to stay away.

She looks back on years of having to renew her permit to be in the city, and being barred from working even though her family needed the extra cash. 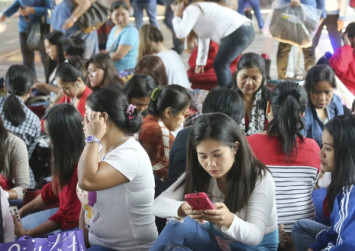 Her story is familiar to less well off mainland women who marry Hong Kong men and have to wait years before they can remain in the city and work, while raising their families.

"As long as I work hard, I can survive anywhere," said Song, who is from Sichuan province. "Why was I made to spend so many years trying to settle down here?"

After she got married, Song got a tourist visa that allowed her to visit Hong Kong. Seven days later, she was back in Shenzhen, in neighbouring Guangdong province, where she worked in a restaurant.

Her troubles began when she got pregnant with her first child and wanted to move to Hong Kong to be with her husband.

First, she had to return to her hometown of Suining to apply for a two-way permit which would let her stay in Hong Kong like a tourist, but not allow her to work.

"When I applied for the permit for the first time, I first had to take the train to Chongqing city and it took more than 20 hours. From there, I took a five-hour bus ride to Sichuan, and then another bus to Suining," Song recalled.

The permit had to be renewed every three months. Although she was allowed to get it done in Shenzhen, it proved not only inconvenient but also costly.

Each time she renewed her permit, she stayed in Shenzhen for about two weeks waiting for it to be processed. Those trips cost her about HK$4,000 (S$677) every three months - because of expenses for accommodation, meals and other things - at a time when her husband earned only about HK$10,000 a month.

Song brought her elder child to Hong Kong to live with her husband in a 100 sq ft flat, for which they paid HK$3,000 a month. They were sometimes so strapped for cash that they could not afford baby milk formula.

She waited four years for the one-way permit, which allowed her to get a job. Migrants with one-way permits can become permanent residents after living in Hong Kong for seven years.

Since Britain handed Hong Kong back to China in 1997, about 975,000 one-way permits have been issued. These arrivals have raised the city's population to about 7.5 million.

One-way permit holders are entitled to social welfare and public resources available to Hongkongers, triggering complaints that they are crowding public hospitals and adding to the long waiting time for public flats.

"You can't just say that it is your human right to be in Hong Kong and so you should be here," said Roy Tam Hoi-pong, convenor of the Population Policy Concern Group, which advocates a "locals first" population policy.

"It's not like you're a refugee looking for a safe place to stay."

Tam and other critics want the national government, which runs the permit scheme, to halve the daily quota back to 75. The Hong Kong government has no say, but Tam and others want it to take control of the scheme.

He does not think being married to a Hongkonger is a good enough reason for mainlanders to move to the city.

"Family reunions do not necessarily need to take place in Hong Kong," he said, suggesting that Hongkongers with mainland spouses could move to the mainland instead. "There are just too many people in Hong Kong. We need to consider Hong Kong's overall interests."

Sze Lai-shan, a community organiser at the Society for Community Organisation, an NGO that helps new mainland immigrants, sympathised with mainland immigrants over the red tape they must put up with to get the permits to join their spouses in Hong Kong.

She said she knew of a family which had to return to Beijing every three months because the mainland spouse was from there and needed to renew the permit.

"You can't imagine the troubles they have been going through," Sze said.

SO HARD TO BE ACCEPTED

The mainland immigrants interviewed said that after they moved to Hong Kong one of the biggest challenges was being accepted by local people.

Song recalled a day when she was walking with a Mandarin-speaking friend on the street when an elderly woman behind them shouted: "You mainland women, stop blocking the road!"

In the first few years after she came to Hong Kong, almost all her friends were mainland women too.

"The first few years were so tough," she recalled. "I always stayed at home. I didn't have a Hong Kong identity card and I felt that everything that happened in the city was not my business."

"I hope Hongkongers can understand that we moved to Hong Kong because of marriage and fate. It's not something I could control. Why don't they tell Hong Kong men to stop marrying us mainland women?" she said.

Two years after marrying her Hong Kong husband and moving to the city, she still feels like an outcast.

"Hong Kong people like to criticise the mainlanders," she said. "Why is there a need to categorise some people as Hongkongers and others as mainlanders? We are all Chinese living here."

During Lunar New Year this year, she was in the queue to buy fish balls from a street-side hawker when a passer-by said sharply: "Get out of the way. Don't you understand Cantonese?"

Chen was too upset to respond, but her friend explained that they could not stand any closer to the hawker because the stove was too hot.

"I didn't want to argue with anyone during Lunar New Year," Chen said.

DREAMING OF A JOB

Chen is counting the days to 2021, when she expects to receive her one-way permit, because she will be able to start working.

Her husband, Danny Chan, is a casual renovation worker and sometimes earns no money at all for three or four months each year. When he has work, he makes only HK$8,000 to HK$12,000 a month.

It takes about four years for an immigrant to get a one-way permit.

"I definitely want to work," Chen said. "My husband is under a lot of pressure since he is the only person working in the family. It has been tough for him."

The couple lives in a 200 sq ft public flat with their two-year-old daughter and the husband's 80-year-old mother.

"It is not easy for my family that I have to be unemployed for four years," Chen said.

Her husband said families with children deserve priority when moving to Hong Kong. He rejected the idea that Hongkongers who marry mainlanders should live on the mainland.

"The money I would make working on the mainland can't compare to what I earn in Hong Kong," he said. "I may consider moving to the mainland when I retire."

Another mainland immigrant, Lily Zhang, remembers longing for the freedom to work, after she married a Hongkonger and arrived in 2006.

"I was so happy when I received the one-way permit," she said. "I could finally get a job. I did not want to depend on my husband."

She prepared for the day she would be able to work by attending a six-month course to become a health care assistant and is now a hospital ward assistant. From what she sees at work, it is the elderly, not mainlanders, who make most use of the city's medical resources.

Zhang wished that Hongkongers could help mainlanders fit in, instead of always blaming them for abusing public resources.

"Hongkongers should embrace us and let us contribute to the economy. We want to work and pay taxes too," said Zhang, who lives in a private flat.

"I am a new immigrant. I work here and I go to the hospitals when I need to. It's welfare that I deserve."

She admitted that, like Song, she has days when she wonders why she married a Hongkonger. "I shouldn't have come here. Life has been so tough," she said.

Song, Chen and Zhang do not get Comprehensive Social Security Assistance (CSSA) welfare payments, but many other immigrants do.

The Social Welfare Department did not have figures on the number of one-way permit holders on CSSA. But a spokesman said that in the 2017-18 financial year HK$885 million was given to 16,048 people who had been in the city for less than seven years.

That was 4.8 per cent of all CSSA recipients, and 4 per cent of the total CSSA expenditure of HK$21.7 billion. Last year's figure was a 52 per cent increase from the HK$582 million given to those who had not lived in the city for seven years in 2013-14.

It is believed that most of those who receive CSSA payments and have not been in the city for seven years are mainland immigrants.

Not all mainlanders married to Hongkongers are two-way permit holders from poor, struggling families.

Some, especially the highly educated, met their partners while working in the city on working visas.

Biomedical researcher Dr Peter Lu, who grew up in Beijing and Shenzhen, fell in love with a Hong Kong journalist and they got married in 2016.

"I can understand the criticism against the one-way permits," said Lu, 34. "The influx has brought inconvenience to citizens."

But he felt mainland tourists were more to blame for Hongkongers' hostility towards mainlanders than one-way permit holders. Last year, Hong Kong attracted 65.1 million tourists, 51 million of them from the mainland.

"There are so many tourists taking the MTR every day," Lu said. "Some of them talk so loudly and lean on the poles. These behaviours affect the locals."

NeoDemocrat lawmaker Gary Fan Kwok-wai insisted the problem was too many mainlanders being allowed in and, like critic Tam, wanted a daily quota of 75.

"Hong Kong's education and medical systems have been overloaded," he said. "The government just can't do property planning since it does not have control over the daily quota."

As of December, there were about 150,200 general applications for public flats and the average waiting time was 5½ years.

As of March last year, almost one in five flat applications included applicants who were mainlanders residing in Hong Kong for less than seven years.

Tsang Koon-wing, convenor of the Coalition for Mainland-Hong Kong Families' Rights, suggested that the Hong Kong and mainland governments set up an office to jointly process applications for permits, so the process would be more transparent.

"The anger against immigrants stems from the government's failure to do population policy planning properly," Tsang said. "I hope Hongkongers can understand that the immigrants are here to be with their families, and they are here through legal means. We should treat them equally and fairly."