A handout photo. The engineering vessel broke into two amid rough seas on Saturday.

Rescuers on Monday (July 4) retrieved a dozen bodies believed to be crew members of a vessel that was split in half by Typhoon Chaba in the South China Sea, and plucked a fourth sailor alive from the chilly waters, but the chances of finding the remaining 14 were dwindling by the hour as the search ended its second day.

Hong Kong and mainland Chinese authorities have sent helicopters, planes and hundreds of boats to scour a patch of ocean about 300km southwest of the city, where the “Fujing001” engineering vessel sank amid heavy waves and strong winds just after 2am on Saturday.

The 12 bodies were discovered on Monday afternoon, national broadcaster CCTV reported, citing the Guangdong Provincial Maritime Search and Rescue Centre, and authorities were trying to confirm their identities.

The fourth crew member was found at about 3.30am after surviving roughly 40 hours adrift in the water wearing his life jacket, and he was in stable condition, according to provincial authorities.

One pilot with Hong Kong’s Government Flying Service described the difficulties they encountered on Sunday as they tried to navigate an area covered with dense fog and littered with wind turbines.

“We had to slow down … We realised the wind turbines were 800 feet tall … We were flying through clouds and had to rely on radar to detect the obstacles before arriving at the scene,” pilot Li Ka-wing told a radio programme on Monday.

Li explained a computer system was used to determine the search perimeter, but he admitted calculations were difficult because of the ever-changing wind direction.

Headwinds were so strong that they increased travelling time and fuel consumption, leaving only 25 to 30 minutes for rescue operations at the scene, the pilot added.

“When I left the scene, another helicopter would take over,” he said. “When I was midway, the third one was already on its way. When I arrived at headquarters, I had to go again after a refuel.”

The Government Flying Service received a report that the Fujing001 was in distress at 7.18am on Saturday as Chaba intensified in strength along its sweep southwest of the city, packing winds of up to 144km/h that churned up waves reaching 10 metres.

The flying service said the initial rescue mission was made more difficult because the ship was near the centre of the typhoon, but three crew members were pulled to safety and rushed to North Lantau Hospital. There was no immediate word on their condition. Meanwhile, the seaman rescued on Monday was sent to a hospital in Zhanjiang in Guangdong province, with the provincial rescue centre saying he was “too frail” to respond to questions.

The service told the Post on Monday that the search had been expanded to cover 2,900 square nautical miles, equal to 9,947 sq km. Mainland media reported that the rescue operation involved seven planes, 246 boats and 498 fishing vessels, while the flying service said it had deployed two fixed-wing aircraft.

The day before, the flying service dispatched four fixed-wing aircraft, six helicopters and 36 rescuers to the scene.

“I have never seen such a large-scale operation with so many helicopters,” Li said. “At this moment, we are still dispatching helicopters to the scene. As frontline rescuers, we will not give up any chances. It is not unprecedented that there are still survivors after such a long period of time.

“We will try our best and use all the resources that we have to search for the remaining survivors.”

The news came a day after the mainland authorities slammed the lack of preparation for typhoons and demanded an investigation into the cause of the disaster.

The Ministry of Transport added that “lessons should be learned from the accident. Vessels should return to port and people should be back on the shore” during typhoons to minimise the risk of similar disasters. 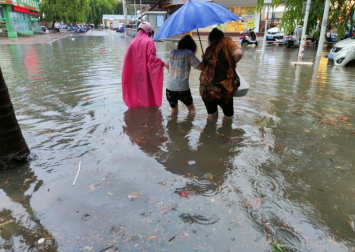 Officials said: “A timely investigation should be carried out to identify the problems and those responsible should be held accountable according to the law and regulations.”

Mainland authorities previously said the ship was wrecked because its anchor chain had snapped.

Louis Szeto Ka-sing, a former chairman of the Hong Kong Institute of Engineers’ mechanical, marine, naval architecture and chemical division, said he believed the strong wind and currents stretched the chain to breaking point, while the boat’s engine might have overheated and stopped working.

“As the wind and waves were against the ship, the anchor chain would be pulled tighter and tighter. If the main engine was able to push the ship forward against the wind, the chain would not have snapped,” he said.

“With the ship thrown up by huge waves, the main engine might not have been able to suck up water for cooling and it might have stalled.”

Szeto added that the vessel type commonly had more than 10 ballast tanks, which were filled with water for balance.

“With huge waves, the ship would be thrown around like a see-saw and its middle part would be subject to great force,” he noted.