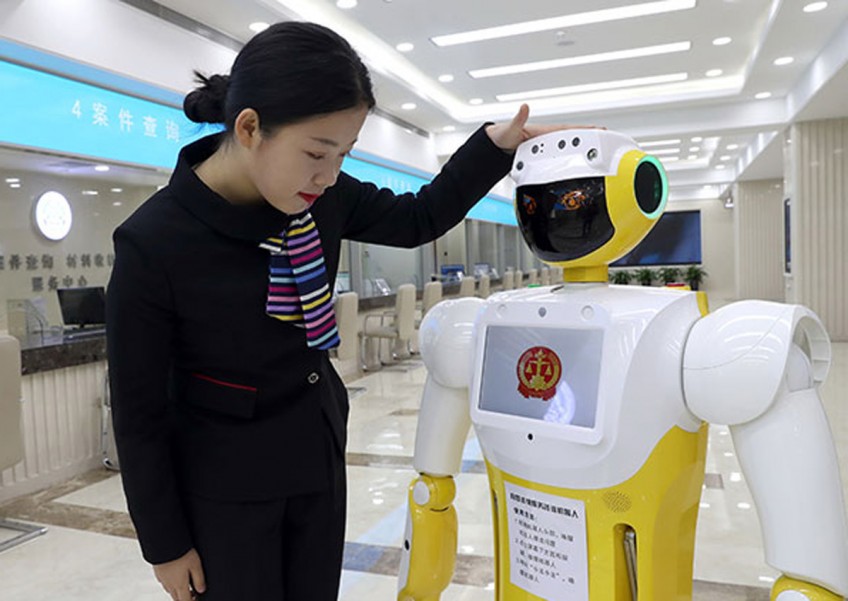 A staff member interacts with Xiaofa, a robot that provides simple legal advice and guidance for litigants, at Beijing No 1 Intermediate People's Court on Thursday.
China Daily/Asia News Network

The Chinese capital's first artificial intelligence robot for legal services was put into operation in a Beijing court on Thursday.

"We used a child's voice to ease the tense emotions of litigants who come here for help."

The robot can move its head and wave its hands as instructions show up on screen, and it can guide people to the exact service window for litigation services.

The appearance of Xiaofa was a big move for the Beijing court, as the capital works to build a "smart" court system. Over 40,000 litigation questions and 30,000 legal issues can be answered by the robot, according to the court.

"Interaction between humans and machines has improved immensely," said Ma Laike, deputy head of Beijing No 1 Intermediate People's Court. "It will decrease the cost of litigation, save trial resources and improve the efficiency of justice."

Before the robot was introduced into the Beijing court system, it was tested by legal professionals.

Faxiaotao can help people analyse the best way to solve a dispute, and also assist them in selecting which attorneys are suitable to accept the case, according to the robot's designer, Itslaw, a company that combines internet technology with law.

For example, if a company's corporate client believes its advertisements or advertising slogans have been illegally copied by a rival company and would like to hire an attorney who is a specialist, Faxiaotao will first recognise what kind of case it is and then analyse its database for suitable lawyers who have dealt with similar disputes.

More than 300,000 attorneys across the country were listed in the company's database last year. When a query is made it selects the best three options, the company said.

The Supreme People's Court has ordered Chinese courts at all levels to build technology-friendly systems for lawsuits and explore the use of big data and AI to help judges and litigants search documents and resolve cases.

An internal intelligent system covers 3,520 courts across the country, giving the courts access to a great deal of information online.