Inbound travellers at the arrival hall of Hong Kong’s airport under the new ‘0+3’ scheme.

Hong Kong’s plans to further ease coronavirus travel curbs could be derailed if there is widespread breaching of regulations and a resurgence in infections, the city’s leader has warned.

Chief Executive John Lee Ka-chiu struck a cautionary tone on Tuesday (Sept 27) with the city on its second day under a new arrangement that no longer requires overseas arrivals to serve hotel quarantine, a major step towards fully reopening to the world.

“If everyone complies with our rules, our path [to resume normalcy] will be smoother. But if many keep breaching the rules, it may not be easy for us to have new considerations on [the relaxation] of measures,” he told the press before his weekly Executive Council meeting.

“If we can put the [possible] rebound under control, we hope to allow more room for activities [to be resumed] gradually according to the actual circumstances.”

During the three days of surveillance under “0+3”, travellers are issued an amber health code that prohibits them from entering venues such as bars and restaurants, or any other premises covered by the vaccine pass. Infected arrivals, as well as local Covid-19 patients, get a red code that bars them from entering high-risk premises citywide.

Lee on Tuesday said he noted the positive response in society to the eased travel rules, but revealed more than 40 people had breached the red code since the system was implemented in August, while 8 to 9 per cent of residents subject to compulsory testing had failed to comply in the past two months.

He also chastised those who used vaccination exemption certificates without proper diagnosis, adding that some 20,000 of such documents had been uncovered so far.

Six doctors and 22 patients have been arrested so far for allegedly issuing or requesting fake certificates. A 65-year-old doctor was the latest to be detained on Tuesday over making a false instrument. He was accused of producing 3,196 exemption documents in three months from February, charging HK$3,000 to HK$5,000 for each.

Apart from rulebreakers, Lee said another factor that could derail the city’s plan to further open up was a possible double whammy of Covid-19 and seasonal flu in a coming winter surge.

“Many experts have said there could be a resurgence of [Covid-19] cases in winter,” he said. “Also, influenza is more active in winter. We have to monitor the situation closely and stay vigilant.”

He pointed out Covid-19 caseloads were still hovering at 4,000 daily, while 20 per cent of public hospital services had been cut to spare capacity for patients.

Hong Kong has reported successive days of declining coronavirus infections. On Monday, the city logged 4,034 new cases, including 188 imported infections. More than 2,000 patients are currently being treated in public hospitals, including 15 under intensive care.

Since the “0+3” plan was announced on Friday, health experts have been calling for further relaxations on travel curbs and local social-distancing rules, provided there is no rebound in caseloads in the coming weeks. The experts argued the restrictions on restaurant seating capacity, building lockdowns, compulsory screening of residents and sewage testing could be removed.

Businesses have piled pressure on the government to lift all curbs and resume normalcy to retain the city’s competitiveness. The latest call was from leading business association the Hong Kong General Chamber of Commerce, which urged authorities to end all Covid-19 restrictions for travellers and fully reopen the border with mainland China.

Representatives in the catering industry have also expressed concerns that the outflow of residents under the “0+3” policy will greatly outnumber the inflow of tourists, resulting in mass lay-offs and closures.

Responding to the chorus of concerns, Lee on Tuesday sought to reassure businesses that it would take time for certain industries to benefit from an overall revival of economic activities. 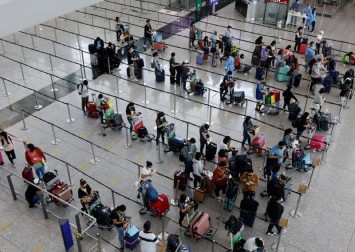 “The new measure has been put in place for one day only. We believe that as many events and conferences will return to the city, [along with] business travellers, the economic benefits are expected to be enjoyed by different walks of life,” he said.

“We will closely monitor the figures, and do whatever we can [to ease curbs] steadily and surely,” the chief executive promised, adding his administration hoped to avoid confusion arising from any policy U-turn.

Neighbouring Shenzhen, meanwhile, has stepped up border control measures to “prevent imported cases”. Asked on Tuesday if this would affect Hong Kong’s plan to roll out a “reverse quarantine” scheme for residents to cross the border, Lee said high-level discussions had been “progressing”.

He added that his government would work towards providing isolation facilities in the city with standards acceptable to mainland counterparts. Lee also said he still held “positive hope” in the plan and believed it would not heighten infection risks for Shenzhen.

On whether local authorities planned to convert some community isolation facilities into transitional housing, Lee said the government would explore different possibilities but these had to be aligned with the pandemic situation and policy.