Analysts said the model pier resembles the Suao naval base in Taiwan.

The Chinese military has refined its anti-ship missile training from striking large, carrier-sized targets to smaller ships and naval bases, according to recent satellite images.

They show a training base in Xinjiang's remote Taklamakan desert with the layout of mock-up ship moored in a naval base that resembles one in northeast Taiwan and other targets in Guam, according to a Taipei-based naval analyst.

The US Naval Institute (USNI) news site said new satellite photos show China is building more large-scale target ranges along the rim of the desert, including model destroyers and piers.

One of the new targets — a mock-up of a destroyer and pier — was built in December, just 13km southeast of an elaborate model aircraft carrier that was exposed by the Colorado-based satellite imagery company Maxar Technologies in November last year.

In February that target was destroyed by a test missile, according to HI Sutton, the writer of the USNI article.

Another similar naval base, built in 2018, about 310km southwest of the original aircraft carrier layout, was found by Damien Symons, an independent defence analyst, Sutton added.

In 2017, Google Earth images of missile test sites on the edge of the Gobi appeared to show models of US bases in Japan, the military newspaper Stars and Stripes reported.

Sutton said the nature, location and strikes on the mock-up layouts had suggested that the targets are meant for testing ballistic missiles. 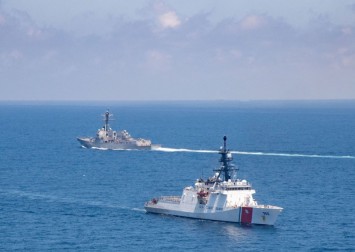 China has developed at least two types of hypersonic anti-ship ballistic missiles, the DF-21D and DF-26.

The former is known as the "carrier-killer", while the latter was dubbed the "Guam Express" due to its range of up to 5,000km — enough to reach the US overseas territory which is home to a major military base.

Lu Li-shih, a former instructor at Taiwan's Naval Academy in Kaohsiung, said he had found a layout that is very similar to the Suao Naval Base in Yilan county in northeast Taiwan.

"I tried to compare [the layout] of US naval bases in Yokosuka and Sesabo [in Japan] and Subic Bay [in the Philippines], but Suao naval port is the most similar," Lu said, adding the target ship in the site is supposed to be the Kidd-class destroyer in the Taiwanese naval base.

"The mock-up and drill designs suggested the PLA warships are simulating precision strikes to hit targets in both Guam naval base and Suao military port by its YJ-21 anti-ship missile." 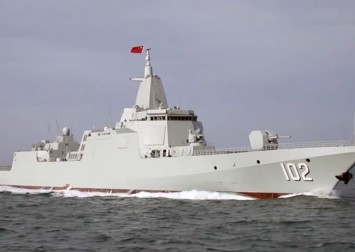 Collin Koh, a research fellow at the S Rajaratnam School of International Studies at Nanyang Technological University in Singapore, said the US carrier strike groups, amphibious ready groups and force concentrations in Guam, which is the forward military hub outside the first island chain would be a key target for the People's Liberation Army's missiles.

Suao is a strategic port designed to keep Taiwan's access to maritime supply chains open in times of war, so Koh said it would also be priority targets of the PLA missiles.

"The PLA would also prime its wartime missile strike targeting key Taiwanese installations - including not just the airbases, [command and control] centres, storage bunkers but also naval bases," he said.

"Suao is located on the Taiwan eastern seaboard, which renders a certain degree of strategic depth and would be less vulnerable than, say, Keelung which is another key [Taiwanese] fleet hub that's located on the western seaboard facing right at the strait and therefore more exposed to PLA strikes."