Chinese scientist He Jiankui shocked the world in 2018 when he announced that he had created gene-edited babies.

Two prominent bioethicists have called on the Chinese government to protect the world’s first gene-edited babies – the result of an experiment that was globally condemned – and any future generations.

The proposal came from Qiu Renzong, from the Chinese Academy of Social Sciences in Beijing, and Lei Ruipeng at Huazhong University of Science and Technology in Wuhan.

It is the first of its kind in China and was submitted last month to the National Health Commission, the Ministry of Science and Technology and the Ministry of Education.

The scientists suggested that a dedicated “research and care organisation” be set up and funds allocated to look after the three children, according to the document seen by the South China Morning Post .

But some scientists and ethicists have criticised the research centre proposal, saying it may not be in the children’s best interests.

It comes as He Jiankui – the scientist behind the gene-edited babies – is due to be released from prison this year.

He shocked the world when he announced in November 2018 at a conference in Hong Kong that he had created genetically modified twin girls, “Lulu” and “Nana”. A third gene-edited baby, “Amy”, was born later. The progress of the three girls is not known.

He said he had used a gene-editing procedure known as CRISPR-Cas9 to rewrite the DNA in their embryos to make them resistant to infection from HIV, which their father had. Experts said there were other safe and effective ways to protect people from the virus.

He was fired from the Southern University of Science and Technology in Shenzhen, where he had been an associate professor, in January 2019. After an investigation, the university said He had “illegally conducted the research in the pursuit of personal fame and gain”.

In December that year, he was jailed for three years and fined 3 million yuan (US$475,170) for violating medical regulations.

He sparked an international backlash with his announcement, and in March 2019 specialists from seven countries, in the journal Nature , called for a global moratorium on heritable genome editing.

But the question of how to care for the three children has never been answered, said bioethicist Qiu, who co-authored the proposal.

“As long as we develop genome-editing technology, we will face this issue. There will be a certain group of people whose genomes are artificially modified or edited,” said Qiu, who is 90 years old. “How should we treat them?”

Qiu said there could be more such children in the future if the technology was approved in some countries, or if there were other illegal cases.

While no country explicitly allows such research at present, it is possible that heritable human genome editing could be legalised in the future, according to Francoise Baylis, a research professor at Dalhousie University in Canada.

Her research found that 96 out of 106 surveyed countries had policy documents relevant to the use of genome editing, while 75 of the 96 countries prohibited heritable human genome editing.

Qiu said there was a need for China to work out how to look after the three children.

“As a vulnerable group who cannot protect their rights and interests by themselves, we should provide special protection for them,” he said. 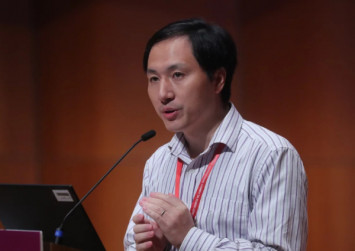 In the proposal, the two bioethicists suggest that He take primary responsibility for the children’s safety, health and well-being. They say the children’s parents, He’s former university and the government should also be responsible.

The Southern University of Science and Technology did not immediately respond to a request for comment.

Qiu and Lei also proposed that the children’s whole genomes should be regularly monitored for abnormalities, and they should be given special treatment if they develop any disease related to genome editing.

But Ernst-Ludwig Winnacker, professor emeritus with Ludwig Maximilian University of Munich in Germany, did not believe a research centre was the best way to care for the children.

“I feel that everything should be avoided which disturbs their normal development as toddlers and children,” he said, adding that any further experiments should be delayed until the children can understand their unique situation and make their own decisions.

Instead of establishing a research centre, she said “dedicated clinician-scientists focused on the well-being of the children” were needed.