'See how far I can go’: Is this Chinese teen the next Stephen Hawking?

Xing can only hold his head upright for short periods of time and so a lot of his education has been through listening.

An 18-year-old with congenital muscular dystrophy who aspires to become China’s Stephen Hawking has become a celebrity after being accepted by the country’s leading university in astronautics.

Xing Yifan, who was diagnosed with muscular dystrophy when only six months old, started studying in Beihang University last week in the company of his mother, China Youth Daily reported over the weekend.

“I want to see how far I can go. I want to run forward a little more,” he was quoted as saying.

His mother once asked him to change to a less competitive class when in high school. He answered: “If I made it to this class, then I can finish it. I see no reason to quit.”

The young man, who is unable to stand or walk and can barely move his neck, was accepted into the respected university with a score of 645 out of 750 in China’s highly competitive college entrance exams, also known as the gaokao.

With his bones growing like a normal child but no muscles developing to support them, Xing weighs only 18kg and uses a wheelchair with the help of his parents.

In a typical 45-minute class, he can sit for only 30 minutes as his spine is twisted, put his chin on the desk to help support his head, with his eyes only able to see half of a book page due to difficulty in moving his neck. For the rest of the class, he has to lie down and participate by listening.

Despite the challenges he faced, his parents made sure he received the same education as other children. Over the years his parents would take turns to be by his side for every single class he took, according to his father Xing Dacheng. Every night, they need to wake up every two hours to help him turn over.

With the ambition of becoming China’s Stephen Hawking, the English theoretical physicist and cosmologist who suffered a similar disease, Xing has achieved an outstanding academic performance to date.

Hawking was diagnosed in his early 20s with a slow-progressing form of motor neurone disease that gradually paralysed him. He died in 2018 after living with the illness for over five decades.

Before going to Beijing for college, Xing had the highest score among all the newly admitted students in his school, a top school in his hometown of Jilin city, Jilin province. 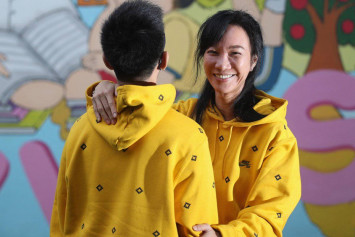 To prepare for the college entrance exams, he spent hours doing writing exercises that would have daunted even the healthiest of teenagers.

On some days he would complete more than 20 test papers, the report said.

To his parents, his academic achievement is a source of pride after years of hard work raising a child with muscular dystrophy

“Every day is a challenge. It’s like a battle. We win when we spend the day smoothly,” his father said. “We dare not think about the future, but we’ll try hard to live well every day.”

The university has prepared a two-bed dormitory with a bathroom on the ground floor for Xing and his mother, who will take care of him full time.