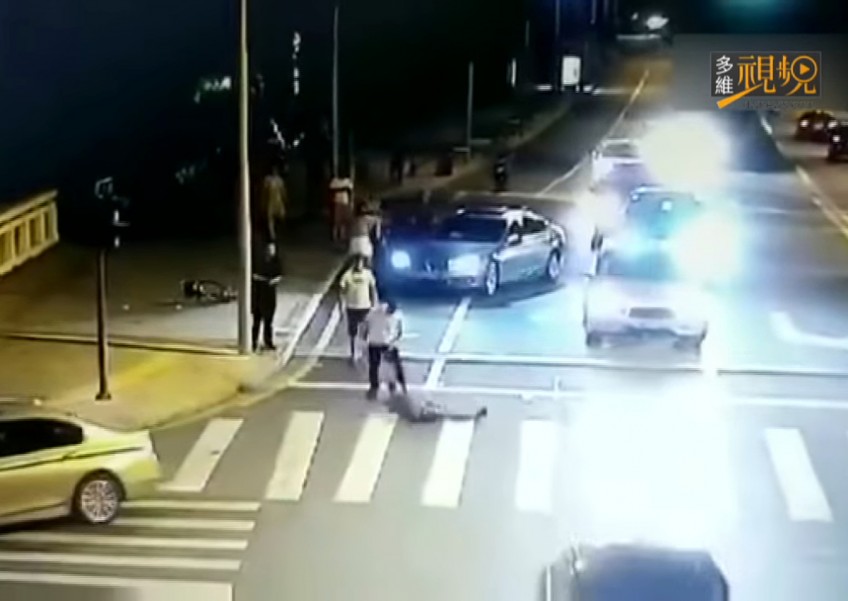 A knife attack in Kunshan, Jiangsu province, on Monday that involved a gang member, road rage and the victim becoming a suspect, has attracted attention online and generated heated discussion about what constitutes justifiable self-defence and excessive force in China.

On Monday, an electric bike rider surnamed Yu was waiting at a traffic light at the intersection of Zhenchuan Road and Shunfan Road when a BMW sedan suddenly veered into the nonmotorized vehicle lane to avoid waiting in line to turn right.

After kicking Yu and pushing him down, Liu retrieved a knife from the car. He brandished it at Yu several times before it was knocked to the ground. Yu grabbed the knife before Liu and slashed Liu several times. Yu then chased Liu and continued to slash him as he ran toward the car. When the attack ended, Liu died.

Yu, 41, had wounds that were not life-threatening, according to a report online by the Kunshan police. Yu was detained.

On China's social platforms, most netizens said Yu should not be charged with excessive force. Instead, he should be considered a hero for "getting rid of an evil for the people".

Liu, born in 1982, had been jailed at least five times and had served about 9.5 years for robbery, blackmail and stabbing people, court records showed. But he was also awarded a Samaritan certificate by the Jiangsu Justice and Courage Foundation in March.

"He provided clues to local police and helped crack a case," said Ma Chongde, the chairman of the foundation's Kunshan branch. "We followed the rules to award him what he had earned."

Yu, who is in charge of the engineering department at a restaurant, was described by his colleagues as kind, easygoing and hardworking, Beijing News reported.

It said that research conducted on justifiable self-defence in 2015 found that only 6 per cent of people charged with undue defence in China were acquitted in Chinese courts.

Opinions vary among lawyers on the current case.

"What the rider did should be considered self-defence and he should not bear criminal responsibility," said Lin Dongpin, a director of the Shanghai Bar Association. "The car's driver held the knife and had an obvious intention to hurt the rider. The rider had been injured by the knife and couldn't judge whether the driver was running for his life or getting another weapon from the car."

"Also, the rider was vulnerable compared with the driver. You cannot ask him to judge the situation precisely. If he didn't fight back, it might be him who was finally lying on the ground dead."

However, some lawyers disagreed, saying that Yu's behaviour should be considered excessive.

"Most of the comments on the internet are inappropriate," said Hong Zi'an, a lawyer with Yingke Law Firm's Shanghai branch. "It's too early to say whether the rider is innocent because many details of the case haven't been released. More evidence is needed to determine whether he is guilty or not when he chased the driver and slashed him - such as if the driver was making threats or planning to fight back."

He said China's current definition of justifiable self-defence and excessive force should not be modified because they help to maintain social stability and the general public's safety.

"China's criminal laws and regulations try to strike a balance between social and legal effects. It would be reasonable if the rider is found guilty."

The Kunshan people's procuratorate is investigating the case.