Shanghai fridge sales through the roof, with people buying bigger or more fridges to support the stockpiling of food during lockdowns.

A video of Shanghai residents buying four fridges and moving them from a truck into their community triggered a heated debate earlier this week, with many who saw the footage, saying were also interested in changing their fridges to a large-sized one or adding a freezer at home as stockpiling food has become a priority during the lockdown.

A man with the alias Qin Yi who lives in the same residential compound in Pudong District as the fridge buyers said one of his neighbours bought a freezer after parts of his old fridge broke and another neighbour bought the freezer thinking the old fridge was too small to contain the meat and beef he had bought in the past days through the community's buying groups, business news app Time Weekly reports.

Qin, who is not among those buyers, said there is a side-by-side refrigerator, with a volume of over 300 litres, in his home and it is full of food that can support his family for three to four days.

A woman surnamed Meng living in another community said some of her neighbours had just made a joint buying order for fridges because they were concerned that the lockdown will last for a long time.

"What's more, they said food package deliveries pose risks of spreading the virus. To reduce the time to go outside to pick up the packages, a reasonable way is to [buy more at a time and] expand the size of your fridge," she said.

Vivian Kong, a woman living in the city's Minhang District, said she decided to dismantle her shoe home cabinet and replace it with a supersized fridge once the coronavirus pandemic is over. 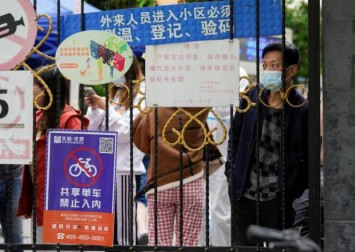 "I've made a strong determination about this. I have a side-by-side fridge at present and I will change it to a new fridge with double the size of this current one. I think hoarding enough food is more important than other things," she told the South China Morning Post.

She said she will make the order soon as she fears the price of fridges will jump after the pandemic.

Statistics from the global market research firm GFK's China branch showed that the number of fridges sold in Shanghai rose by 48.4 per cent year on year in the last week of March.

In the second week of April, from April 4 to April 10, the volume of fridges sold in the city has surged by 153.2 per cent from that of last year.

Midea Group, a leading domestic home appliance manufacturer, said searches for fridges at its website were on par with that on the Singles' Day shopping festival, Time Weekly reports.

Some internet users accused the four fridge buyers for exploiting those volunteers who help them carry the heavy machines.

As required by the authorities, Shanghai residents should not step out of their residential buildings, so food packages are delivered from the community gate to the buildings by volunteers. Many people call on the public not to order heavy things, like beverages.

But some internet users said fridges are must-buy products and there was nothing wrong with the purchase.