Damas perform a square dance at a residential area in Beijing.

But in Anting Town’s Old Street in Jiading District, in the northwestern part of Shanghai, passersby and commuters may double-take when they see a large group of residents primarily in their twilight years performing choreographed dances in apparent silence.

No, the damas have not simply memorised the steps; they are participating in a “silent disco” version of line dancing.

According to Shanghai Daily, Dou Xiangxin, the leader of a 200-strong dance crew called “Jack”, named after his internet persona, was having tensions with local residents over the size and scale of his 200-person-strong troupe.

Because the group is so large, the music has to be extremely loud so people in the back can dance to the beats, creating problems with people who live nearby. 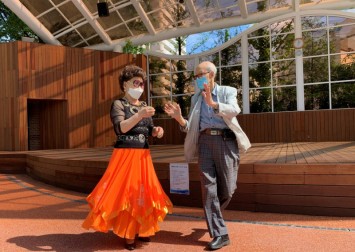 Thinking outside the box, Dou found a unique solution to the problem. On the advice of another group dancing leader, Shi Faming, he turned to analogue technology to solve the problem: an FM radio transmitter.

According to a video from Shanghai Daily , the transmitter accepts a mobile phone input so Dou can personalise the broadcast. Then the dancers tune in to the same FM station with their personal listening devices to synchronise the group.

One dancer in the video said the solution also solved a different problem: confusion created by competing music drifting in from nearby line dancing soundtracks. Now, the headphones block out the external noises so the damas can hear their own music more clearly.

Shi said the goal is to bring “silent disco” line dancing to other parts of Shanghai.

The history of line dancing traces back to the Cultural Revolution (1966-1976), which explains why the activity is dominated by ageing women, who would have been in their childhood or teen years during that period.

According to the South China Morning Post, large-scale group political movements left a lasting impact, such as the Great Linkup of 1965, when millions of people flocked to Tiananmen Square to catch a sight of Chairman Mao Zedong. 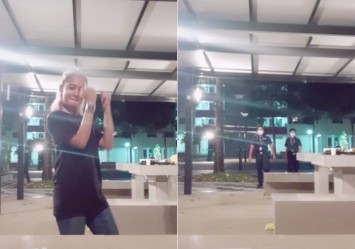 Moments like the Great Linkup led to a portion of society placing immense value on collectivism, and they often value the state over the individual. According to The Post, this is why damas have a bad reputation as an avalanche of noise and disruption that sometimes do not listen to reason.

In more modern times, square dancing became a popular avenue for people from rural China to meet strangers in their new homes during the rapid urbanisation of the past 40 years.

The city of Xianghe in the northern province of Hebei holds the Guinness World Record for the largest line dance. 18,431 participants danced simultaneously for five minutes and 22 seconds and the group had to practise for six months to ensure they danced in unison.

In February 2020, when Wuhan was in the middle of its coronavirus crisis, line dancing provided a rare moment of positivity when a video emerged of nurses leading patients who had tested positive for the disease in the activity.

Communist Party mouthpiece People's Daily wrote, “This is the most amazing square-dancing ever seen!” on their Weibo account at the time.