A leading shipping agent and a Chinese captain were on Monday fined a total of HK$99,000 (S$17,163) and the latter given a suspended jail term for bringing nine Singaporean military vehicles into Hong Kong without a proper licence nearly three years ago.

APL was ordered to pay HK$90,000 and shipmaster Pan Xuejun HK$9,000 after they were convicted at the District Court of breaching Hong Kong's Import and Export Ordinance. Pan was also handed a three-month prison sentence, suspended for 18 months.

APL is a sister company of leading cargo firm American President Lines, which is headquartered in Singapore.

While their lawyers argued during the trial that they were completely unaware of the military vehicles on board the vessel they were involved in running, Judge Stanley Chan Kwong-chi refused to accept their explanation. 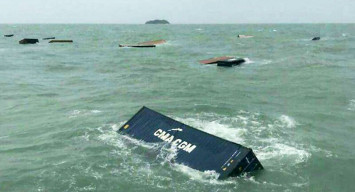 "It could not be stored in a normal container, but a flat rack container," Chan said, stressing the size of the armoured vehicles.

While there was a piece of large canvas placed on top of them as a cover, "the tyres could still be seen which could not be covered entirely", Chan said, concluding it was not possible to have missed them.

The fact the receiver was the defence ministry of Singapore and the sender Taiwan also indicated the nature of the cargo, the judge added, before handing down his verdict.

The dispute surrounding the nine Terrex troop carriers threw Hong Kong and the Lion City into a rare diplomatic tussle in 2016, after the armoured vehicles were found on Hong Kong's shores without the required licence.

City officials found them aboard the container ship APL Qatar in November that year, three days after they left Kaohsiung, Taiwan, following a military training exercise. None of the vehicles had been granted a licence - issued by the director general of trade and industry - allowing for the import of "strategic commodities", for which the prosecutors said Singapore-based APL and Pan should be found liable.

During the 15-day trial, which started in October last year, both the firm and the shipmaster pleaded not guilty to importing strategic commodities without the necessary licence.

In particular, defence counsel Joseph Tse Wah-yuen SC, for APL, which is a locally registered non-Hong Kong company, contested that his client was only a shipping agent in charge of filing documents. Its sister company American President Lines was the actual carrier, he said.

But the judge disagreed. "APL, as the shipping operation agent, acted as the representative of American President Lines to cause the vehicle to be imported into Hong Kong," he said.

Pan's barrister, Olivia Tsang, argued that just like a pilot, Pan should not be held liable for all the goods on board.

Chan rejected these assertions, saying Pan could not blame it on his subordinates or the shipping agent.

The judge said Pan was by no means just a "rubber stamp". As a captain, he was answerable to the Hong Kong authorities for the goods he was shipping.

It was later proven to contain one of the Terrex vehicles, which were amphibious, carried tear gas launchers and could withstand anti-personnel mines.

Five more were found on the same deck, while three others were in storage spaces lower down.

While they were of military grade, a form which APL staff showed to officers described them only as "vehicles", according to Pang.

The cars, worth a total of HK$136.6 million, were impounded at the River Trade Terminal in Tuen Mun before being returned to the Singaporean government on January 26, 2017.

In mitigation on Monday, Tse called the incident an "exceptional case" and said APL had not attempted to deceive local authorities in any way.

Tsang meanwhile painted her client Pan in a good light, recounting how the father of two had climbed the career ladder from a trainee to captain. He was also the sole breadwinner in his family, she said.

The judge said he had given Pan a lenient sentence.

A spokesman for the Hong Kong Customs and Excise Department said it welcomed the verdict. "It assures our commitment to comply with the international standards of the strategic trade control and that a robust control system is in place for the purpose," he said.