Gan Yu was left stranded on the mountain after he became unable to walk.

A Chinese power station worker who was left stranded for two weeks on a mountainside after helping to save local villages from flooding following a major earthquake in the southwest of the country has been rescued.

Gan Yu, a worker at the Wandong hydropower station in Sichuan’s Luding county, was found by a local villager on Wednesday (Sept 21) who had heard about rescuers’ attempts to reach him.

Ni Taigao, the villager who found Gan told local news portal Thecover.cn that he learned rescuers were searching for the 28-year-old two days ago and decided to help because he was very familiar with the hill of Menghugang, where Gan was eventually found.

He left a relative’s house at 7am with two bottles of water and some food. After hiking for more than two hours, he heard someone calling for help on a hillside and found Gan lying in the woods.

Gan’s clothes were torn and had injuries on his legs. Ni said he immediately called the local government and gave him a drink.

“He looked fine, but he cried a lot when seeing me and said it was good that he met me,” Ni said. He also called his family to bring clothes for him.

They transferred Gan to a care station in Menghugang, where a helicopter took him to a local hospital.

The report said he was in a stable condition but was aching all over.

Gu had been working at the power station on Sept 5 when the 6.8-magnitude quake struck, and helped his colleague Luo Yong to turn off the plant’s generator to prevent further damage.

Luo has previously told Sichuan Daily how he opened the floodgates to stop the dam being breached and flooding the villages below.

According to Luo’s account, the pair then set off into the mountains to look for fruit, but on September 7 Gu became too exhausted to walk. Luo left him alone with some food and water and promised to return with a rescue team. 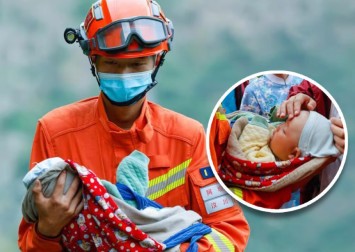 Luo was rescued a day later, about 75 hours after the earthquake struck, when a helicopter crew spotted him lighting a fire in an empty, devastated village. He drew them a detailed map of where he had last seen Gu, but three separate searches had failed to find him.

Luo said he was glad to hear that Gan had been rescued. “I lost my phone and did not have his number, I was trying to find a way to contact him. I want to see him.”

Luding was the epicentre of a magnitude 6.8 quake that killed at least 93 people, with 25 still missing. It was the worst earthquake to hit Sichuan in five years.