The mother of Canadian popstar Wanting Qu has been convicted of corruption by a Chinese court and sentenced to life imprisonment, more than five years after a trial in which prosecutors had requested the death penalty.

The Harbin City Intermediate People’s Court announced late on Wednesday (Nov 17) that Zhang Mingjie, 66, a former planning official with the municipal government in the capital of northern Heilongjiang province, had been convicted and sentenced that morning, ending years of uncertainty about the high-profile case.

She was found guilty of bribery and abuse of power over a 2011 property deal involving the redevelopment of state-owned farmland, the court said in an announcement on its website.

It said she received a cash bribe of five million yuan (S$1.06 million) from the developer and a stake in the project worth 93 million yuan.

The scheme caused losses of more than 230 million yuan to the public purse, the announcement said, and Zhang’s sentence included the seizure of all her assets.

“The illegal income and its fruits involved in the case will be confiscated and recovered,” the court said.

A co-defendant, Wang Shaoyu, was also convicted of taking bribes, sentenced to 14 years in prison, and fined three million yuan.

The court’s announcement included a photo of Zhang and Wang in court, dressed in blue medical gowns and wearing goggles and masks.

In its reports on Zhang’s July 2016 trial, the state news agency Xinhua said that she was the deputy director of Harbin’s development and reform commission.

She was accused of selling the public farmland to the developer for far below its market value, in exchange for kickbacks.

Farm workers who lived in dormitories on the land were denied compensation, Xinhua said, while other reports said the developer shut off their heat to force them to leave; temperatures regularly reach -20 degrees Celsius in Harbin.

Qu, 37, who first found fame as a pop singer, then as the de facto first lady of Vancouver when she was the girlfriend of then-mayor Gregor Robertson, could not be reached for comment.

Her record label, Cros Music, did not immediately respond to a request for an interview.

In 2018, Qu had expressed confidence in the handling of the case by the “perfect and righteous” Chinese justice system.

But in January this year, she shared a claim on social media by a person claiming to be her mother’s sister, Zhang Mingkun, that a 350 million yuan embezzlement charge against Zhang Mingjie had been withdrawn.

The purported sister also said on Weibo that interrogators had made Zhang Mingjie confess by threatening Qu.

“[Investigators] said during the interrogations that Zhang Mingjie would definitely get the death sentence, and if she did not disclose everything honestly, they would arrest [her] relatives.

"They also forced Zhang Mingjie to admit her guilt by threatening the reputation of Wanting Qu,” the January 17 post said.

In September 2020, Qu had said on Weibo that there was “still no result” on the sixth anniversary of her mother’s arrest, and she was “trying to keep faith in justice”. 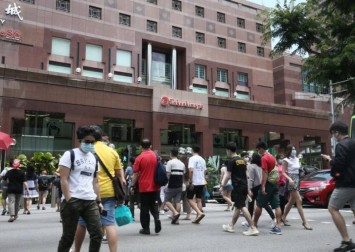 But she suffered a severe backlash on Chinese social media and was rebuked by China’s anti-corruption body, the Central Commission for Discipline Inspection, in a commentary on her remarks.

Qu moved to Canada as a teenager. Her first album, Everything in the World, went platinum in China in 2012, and she sang on CCTV’s 2013 New Year’s telecast.

They got to know each other when Qu was appointed Vancouver’s tourism ambassador to China in 2013, and went public with their relationship in early 2015.

Robertson later divorced his wife of more than 25 years, Amy Robertson, although a spokesman said no third party was involved in the split and the Robertsons had been separated since mid-2014.

Qu and Robertson broke up in 2017. He has since remarried.

Qu has never given an interview about her mother’s case.