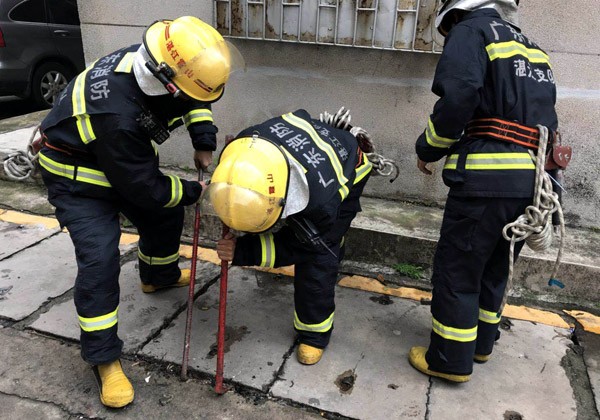 A stray cat that was trapped underground in a 50-meter-long cable tunnel in Zhanjiang, Guangdong province, for five years is believed to have finally escaped through a gap made in a concrete slab.

Ah Ying, a cat lover, visited the site on Sunday and Monday and did not see the creature in the tunnel.

"It must have come out," she said.

Firefighters visited the site on May 1 after learning that the animal was stuck in the tunnel.

Nearby residents said the cat was probably trapped when construction workers sealed the tunnel with heavy concrete slabs five years ago. Locals have been feeding the feline ever since by dropping food scraps through the narrow gaps between the slabs.

After receiving a plea for help, firefighters made a hole for the cat to escape last week.

"Some people said the cat may be afraid to come out after being out of touch with the outside world for so long."

The cat has been described as yellowish, small and thin.

"We would say 'meow' and the cat would come to the gap and wait for food. We tried to open up the slab but couldn't without the proper tools," Zhanjiang Evening News quoted a resident as saying.

Ji said he had not encountered an animal trapped for so long before.