Pro-democracy protesters and police face each other in Mong Kok during the civil unrest in 2014.

A university student who sued Hong Kong police for HK$12 million (S$2.1 million) accusing an officer of "violently and brutally" grasping his genitals has agreed to settle the case despite strong evidence in his favour.

City University student Li Cheuk-hin sued the Commissioner of Police for damages in April 2015, after he claimed he was assaulted during the Occupy protests in Mong Kok in the early hours of December 1, 2014.

Court documents outlined a string of allegations including, gross indecent assault amounting to torture, unlawful arrest and detention, as well as property loss, which arose when some officers reportedly threw his backpack away to handcuff him.

"One policeman violently and brutally grasped the plaintiff's penis and testicles for a certain period of time which surely amount to gross indecent assault," the writ said. "The plaintiff was in great pain."

His lawyers argued the police "should be held vicariously liable for all the unlawful acts and deeds" for they had seriously violated his human rights, and breached their statutory duty as well as the Bill of Rights and the Basic Law, the city's mini-constitution.

Police use of force was a controversial issue during and after the 79-day civil disobedience movement in which protesters blocked major roads in Hong Kong to fight for greater democracy. 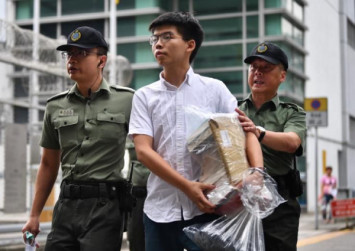 Protesters have complained of abuse, which led to eight officers being convicted and jailed on assault charges. All eight officers have subsequently lodged appeals, but seven of them are still waiting for the court's judgment.

The present case was originally set for a five-day trial at the District Court starting on Monday, after it was transferred from the higher Court of First Instance.

But the court heard the parties reached a settlement last Friday.

District judge Andrew Li Shu-yuk asked why both sides had agreed to a consent order at the last minute, and said the plaintiff had a "clearly arguable case".

"The video can certainly strongly indicate that excessive force was being used during arrest," Li said.

The plaintiff's lawyer, however, revealed that he did not have confidence in the case.

His willingness to pay 80 per cent of the defendant's costs also made the judge uncomfortable about making the order because the numerous fees - estimated at HK$200,000 to HK$300,000 - could be a burden for a fresh graduate.

But the judge eventually agreed.

Speaking to the government lawyer, he continued: "If your client is going to teach this young man a lesson by bankrupting him, I would be very disappointed."