Several tents at a mobile coronavirus testing station burned down early on Friday, with arson suspected.

Four tents at Sha Tsui Road Playground were burned, with many damaged medical packs scattered on the ground.

The incident came to light as Hong Kong confirmed zero new coronavirus cases for the second day running on Friday.

Police said multiple fire reports were received shortly after 2.30am. No one was injured in the incident.

“The cause of the fire appeared to be suspicious. The case is listed as arson and an investigation is under way,” a spokeswoman said.

Firefighters put out the blaze in about 10 minutes.

A spokesman for the Food and Health Bureau said services at the station were temporarily suspended due to the damage. He urged those who needed tests to go to another facility at Wai Tsuen Sports Centre in the same district. 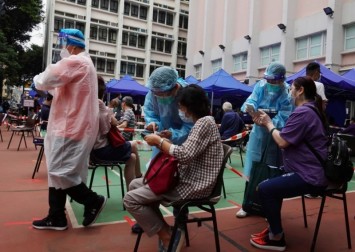 “The testing service at that mobile specimen collection station is expected to resume after 2pm today.”

The station in Sha Tsui Road Playground is operated by KingMed Diagnostics, and is expected to be open until June 13.

Hong Kong marked a day of zero new coronavirus cases for the first time in more than half a year on Thursday, suggesting a promising turnaround in the city’s months-long fight against a fourth wave of infections that emerged last November.

As of Friday, the city’s official case tally stood at 11,836, with 210 related deaths. There were fewer than five preliminary-positive cases pending confirmation.