Foxconn founder and chairman Terry Gou, who announced that he would run for Taiwan presidency, had said that the one-China principle of the 1992 Consensus should be based on "respective interpretations".

Taiwan's future lies in national reunification and the well-being of its people in national rejuvenation, a Chinese mainland spokesman has said.

Mr Ma Xiaoguang, a spokesman for the State Council Taiwan Affairs Office, made the remark in response to Foxconn founder and chairman Terry Gou's comments on the 1992 Consensus, which embodies the one-China principle.

Mr Gou, who announced last month that he would enter the Kuomintang (KMT) primaries and join Taiwan's 2020 leadership election, said the principle should be based on "respective interpretations".

Noting that the mainland and Taiwan both belong to one China, Mr Ma said on Wednesday (May 15) that the principle has clearly defined the nature of cross-Strait relations, which are not state-to-state relations.

It is in the common interest of people from both sides to uphold the principle, to oppose agitation for Taiwan independence, to work for the peaceful development of cross-Strait relations and advance the peaceful reunification of China, he said. 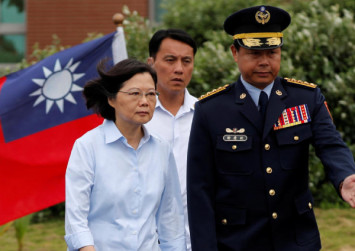 The two sides should work together to resolve differences based on the one-China principle, with responsibility for the Chinese nation and future generations, he added.

Mr Ma also criticised the words and deeds of Democratic Progressive Party (DPP) officials and secessionists, and added that the mainland will never tolerate or be vague about the issue.

Taiwan leader Tsai Ing-wen recently made many visits to military camps on the island and appealed to voters to support Taiwan independence.

Mr Ma said in response: "China's sovereignty and territory brook no division. We firmly oppose any attempt to damage the one-China principle and undermine cross-Strait relations."

Referring to arms sales by the United States to Taiwan, Mr Ma said: "We once again warn the DPP authorities that it is not reliable to bet on foreign force for Taiwan independence."

The island's authorities have also tried to prevent exchanges between different sides. They amended rules to prevent some officials from the KMT visiting the mainland for talks with the Communist Party of China.

Since 2002, Taiwan's education authority has prevented university students from joining the annual intern programme organised by the China Association for Science and Technology.

Mr Ma said exchange programmes play an important role in improving cross-Strait relations and enhancing the well-being of compatriots on both sides.

"However, the DPP authorities have used every possible means to obstruct normal exchanges and describe the measures taken by the mainland to do practical things for Taiwan compatriots as a threat to Taiwan," he said.

"Taiwan compatriots will recognise that the DPP is seeking its own selfish interest and the benefits of election at the cost of damaging the essence of cross-Strait relations," Mr Ma added.